5m children for “emergency” vaccination in Borno, others 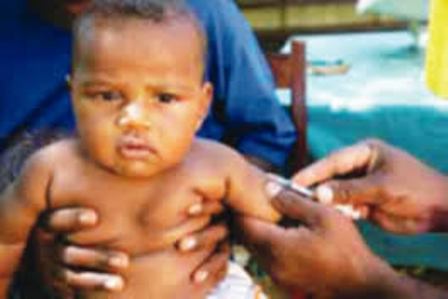 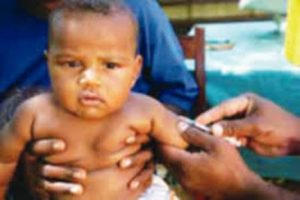 Nearly five million children are currently being immunized in Borno, Yobe and Adamawa states against killer diseases by a team of World Health Organization, WHO, Federal Government and other stakeholders in the country.

According to a statement from the organisation, a total of 4, 766, 214 children in the region would be immunized against measles outbreak and other diseases for a period of two weeks.

The two-week campaign, which started on 13th of this month, would target all children aged six months to 10 years in accessible areas of the three states.

Many children were not reached in the past by vaccinators following years of bombardments by the Boko Haram insurgents who had held some parts of the states hostage.

Consequently, the region’s health indices have worsened, following millions of children and adults who were forced out of their homes and made to live in unsafe places. The region has been exposed to various humanitarian crises, with new cases of poliomyelitis recorded in Borno two years after the nation last recorded any case of the virus.

“This measles vaccination campaign is an emergency intervention to protect more than four million children against a highly contagious and sometimes deadly disease.

“Massive disruption to health services in conflict-affected areas for many years has deprived these children of essential childhood vaccinations. In addition, many of them have severe malnutrition, making them extremely vulnerable to serious complications and death from measles,” the WHO Country Representative in Nigeria, Dr Wondimagegnehu Alemu said.

The organization also claimed that polio programme provides crucial support for general wellbeing of the children as  it is supporting the three state primary healthcare development agencies to prepare for the campaign; working with partners including UNICEF, the United States Centers for Disease Control (CDC) and other health nongovernmental organizations.

Dr Alemu further said: “Nigeria’s well-established polio vaccination programme provides a strong underpinning for the campaign. Population data from the polio programme has been essential to guide planning for the measles campaign. We are also able to make use of staff that have vast experience in providing health services in very difficult and risky areas.

“High insecurity, difficult terrain and lack of functioning health facilities add to the enormous logistical challenges of organizing a large mass vaccination campaign that requires assembling and training more than 4000 vaccination teams and ensuring the vaccine is kept within cold chain conditions (+2⁰ to 8⁰ C) in a climate where average daytime temperatures are above 30⁰ C.

“The vaccination teams for this campaign are made up of 7 people including a supervisor, vaccinators (health workers), record keepers, community mobilizers and town criers. The teams will also give children deworming medication and vitamin A supplements at the same time as the measles vaccination.

“To prevent double vaccinations especially in schools and camps for displaced people, vaccination cards will be issued to all vaccinated children as well as the use of pen markers to mark their thumbs.”

Do traditional healers really know what they treat?