The Nigerian media and PR family has again been thrown into mourning as another prominent practitioner Osita Ike, the only son of  Professor Chukwuemeka Ike, the traditional ruler of Ndikelionwu,  Anambra State,  died early Saturday morning as a result of asthma attack. He reportedly had an attack on Friday night and was rushed to the hospital where he gave up.

Just like the case of another journalist, Vanguard Newspaper’s lively and jocular entertainment editor  Ogbonaya Amadi four years ago, Osita was reported to have tried subduing the attack with his inhaler but this failed.  Unfortunately, the hospital could not save his life.

Now, asthma is back in the news. Indeed, experts have warned that the condition which reportedly affects about 15-20 million people in the country is on the increase worldwide. However while asthma patients around the world are striving to control the disease, studies  have shown that a majority of patients in Nigeria are still uncontrolled despite frequent visits to their doctors or pharmacists.

Experts describe uncontrolled asthma as a serious concern as it causes patients to experience symptoms such as shortness of breath and disturbed sleep. Besides, uncontrolled asthma patients use more healthcare resources and because they overestimate their control and under-report their symptoms, it makes it difficult for doctors to assess asthma control correctly. 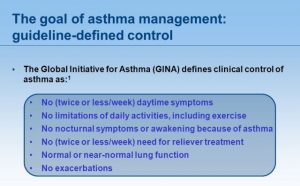 A Recent survey has also revealed that very few Nigerians could be said to be in control of the dreaded condition. According to the Global Strategy for Asthma Management and Prevention (GINA) (2007), asthma control means that a person with asthma has:

For instance, experts say majority of asthma patients in Nigeria are under-diagnosed and those diagnosed are not receiving adequate management. Also, there is a general low level of awareness about the disease, especially its chronic nature and various strategies for its treatment, even among medical personnel.

Not only that, very few asthmatics in Nigeria know their peak flow. Yet, experts say a  peak flow meter remains the key to determining how an individual could tell the exact state of his  asthma to be able to prevent an attack.  If peak flow numbers are declining, it indicates that the condition is getting worse and the asthmatic must then act quickly to prevent an attack. Most Nigerian asthmatics have never seen a peak flow meter, acknowledged as a very important  part of asthma care plan.

“With the level of asthma care available to Nigerians, it is surprising that the nation does not record very high emergency cases of asthma,” said a general medical practitioner who pleaded anonymity. There are several reasons to agree with him. Apart from ignorance on the part of both the  asthmatics and their doctors  on how to manage the condition and stay free of attack, many doctors will not consider referring patients to specialists even when their patients no longer respond to basic treatments.

But experts  say asthma needs not result in death in most cases.  This is because Guideline-defined asthma control incorporates a number of parameters, including not waking at night and not using reliever medication more than twice per week, which should make the individual asthmatic live a relatively healthy life.

Here are some recommendations by experts on effective asthma control.

In case of an attack 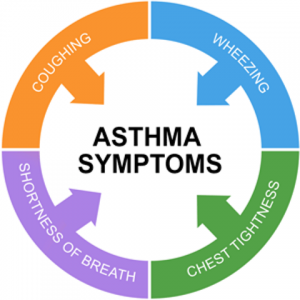 Attack becomes an emergency when:

This is the time to seek urgent medical attention. Every effort should be made to get to the hospital.

Facts you should know:

Asthma is a chronic disease characterized by recurrent attacks of breathlessness and wheezing, which vary in severity and frequency from person to person. Symptoms may occur several times in a day or week in affected individuals, and for some people become worse during physical activity or at night. During an asthma attack, the lining of the bronchial tubes swell, causing the airways to narrow and reducing the flow of air into and out of the lungs. Recurrent asthma symptoms frequently cause sleeplessness, daytime fatigue, reduced activity levels and school and work absenteeism. Asthma has a relatively low fatality rate compared to other chronic diseases.

Symptoms: These may include Coughing, especially at night, wheezing, shortness of breath Chest tightness, pain, or pressure

According to WHO, the fundamental causes of asthma are not completely understood. The strongest risk factors for developing asthma are a combination of genetic predisposition with environmental exposure to inhaled substances and particles that may provoke allergic reactions or irritate the airways, such as:

Other triggers can include cold air, extreme emotional arousal such as anger or fear, and physical exercise. Even certain medications can trigger asthma: aspirin and other non-steroid anti-inflammatory drugs, and beta-blockers (which are used to treat high blood pressure, heart conditions and migraine).

Urbanization has been associated with an increase in asthma. But the exact nature of this relationship is unclear.

Warning signs for an attach: A drop in peal expiratory flow rate (if you have a peak flow metre);  increased cough, wheezing, chest tightness, some difficulty performing normal daily activities and individual factors you notice over time that indicate worsening asthma or an asthma attack.

Know Your Medications: Understanding the purpose of each medication in the treatment of asthma is very important because some medications are designed for the acute relief of asthma symptoms and an asthma attack and some for the long term control of asthma. Taking a long-term beta agonist control medication during an acute asthma attack can actually lead to worsening of asthma. Asthma medication can be divided into two categories:

Have  and asthma care plan: This should be worked out with your doctor. The asthma care plan will outline which specific medications to take depending on peak flow and other symptoms.

Identify Indications For Emergency Care: One of the most important skills as a patient or parent of a child with asthma is to know when you need to call your doctor or just head straight to the emergency department. All of the following symptoms are indications that you or your child needs to seek a healthcare provider for emergency care immediately: