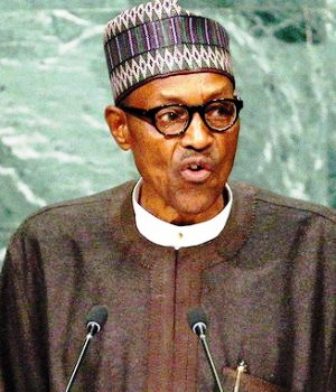 President Buhari at the UN yesterday

President Muhammadu Buhari is expected to serve as a Co-chair of the first Multi-Stakeholder Panel discussion at the United Nations High-Level Meeting (UN HLM) on Tuberculosis (TB) which holds today at the UN Headquarters in New York, United States of America.

President Buhari, according to the programme of the High Level UN meeting,  will be joined by Mr. David Sergeenko, Minister of Internally Displaced Persons from the Occupied Territories, Labour, Health and Social Affairs of Georgia to chair the session which will also feature a keynote address by Mr. Bill Gates, Co-Chair, Bill and Melinda Gates Foundation.

The one and half hour session will  focus on: “Accelerating comprehensive response through access to affordable prevention, diagnosis, treatment and care to end the tuberculosis epidemic, including multidrug-resistant tuberculosis, taking into consideration co-morbidities and the linkages to relevant health challenges on each country’s path towards achieving universal health coverage, taking note of and building on the efforts concerning an accountability framework to drive multisectoral action, as envisaged in the Moscow ministerial declaration.”

The world leaders are currently meeting at the United Nations General Assembly first-ever high-level meeting on tuberculosis (TB) to accelerate efforts in ending TB and reach all affected people with prevention and care. The theme of the meeting is “United to end tuberculosis: an urgent global response to a global epidemic”.

The high-level meeting on TB is a tremendous and unprecedented step forward by governments and all partners engaged in the fight against TB. It follows on from a very successful Ministerial Conference on Ending TB in Moscow on 16-17 November, 2017 which resulted in high-level commitments from Ministers and other leaders from 120 countries to accelerate progress to end TB.

The meeting is expected to result in an ambitious Political Declaration on TB endorsed by Heads of State that will strengthen action and investments for the end TB response, saving millions of lives.

President Buhari is leading Nigeria’s powerful delegation which include the Minister of Health, Prof. Isaac Adewole, to the UN meeting. The minister was one of the panelist at a summit held yesterday, September 25, by global health and business leaders as part of steps to end the world’s deadliest infectious disease.