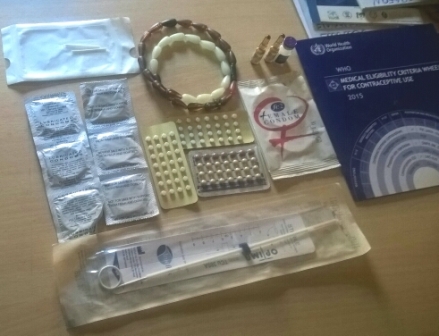 “Maybe I would have given birth to eight or nine children by now if I’d not heard of family planning, ” user-turned mobilizer says.

Chika Ohaeri is a 36-year-old woman with five kids. This mother of four boys and one girl who lives in Ibafo area of Ajeromi Ifelodun area of Lagos with her family is so fertile that she could get pregnant by mere ’touch’ from her husband.
Immediately after her marriage in 2002, marriage, she started ’hatching’ children like a very fruitful hen. Like her husband, she was worried by the way the family was multiplying speedily.
However, help came their way when her last baby was three month old. Mr. Ohaeri got the privilege information about family planning through his friend and rushed home to inform his wife for her to make further inquiry. She did and has remained thankful till date. Now, she wished she had prior knowledge of family planning as she certainly wouldn’t have had up to five children.
Chika tells her story: “My husband heard about family planning through friends, and he came back home and told me to make inquiries about it. After, the inquiries, I adopted the 5-year implant method in March 2014. Maybe I would have given birth to eight or nine children by now if I’d not heard of family planning. I am stronger, healthier and my stature is very okay.”
And with a chuckle, she confided in the reporter that her sexual life also took a new turn as her husband had since jettisoned the ineffective withdrawal method of family planning. And now there’s no fear of unwanted pregnancy, the man is happy and enjoying himself.
“He even loves it more than I do and tells his friends freely about family planning these days.” she added.
Now, Chika has become a family planning mobilizer with Center for Communication Programme in Nigeria (CCPN) under the NGO, Nigerian Urban Reproduction Health Initiative, (NURHI). Her passion for family planning is enough to convince even the staunchest cynic as she advises other women.
“When I go out, I tell them the benefits I have derived for three years and they are responding. I also talk to men and give them condoms. They always ask for my phone number even as I walk on the streets. I’ve been branded ‘Madam family planning.'”
She however debunked one of the myths surrounding the implants form of contraception saying, “The only thing that happened is that when I did my own, I bled for two months. When the bleeding continued for the second month I went back to the hospital to complain but I was told to go home with assurance that the method would get used to my body. Eight days into the third month, the bleeding stopped and I have no more complaints. My stature is fine; my period is back to four days.”

Mariam Quadri, 25, and a mother of two who lives in Ijesha area of Lagos also has reasons to be thankful for knowing about family planning. She adopted the implant method three months ago. According to her, beyond other benefits, she is free from menstrual pains.
The hairstylist whose husband is a trader told NHO: “The implant I just did three months ago is my first attempt of family planning. After it was inserted, my menstrual period lasted for 15 days but after then, it normalised. I used to have menstrual pain but after I did it there is nothing like menstrual pain again. I am very comfortable with it.
“Women should not listen to what people are saying outside; they should come directly to the experts for proper advice on what to do and the method to choose. No money was collected from me, the test was free and they inserted it free in Ijesha Primary Healthcare. I had to adopt FP after it was explained to me because I want to take care of my two children as much as I want.”
How did Mrs. Quadri get to know about family planning? She said:
“The CCPN social mobilizers came to our house for the reach out and my husband heard about it. The method I did is for three years,” she narrated.
The story of Mrs Safiat Alade, 32, an Ijesha resident, is similar to Quadri’s FP experience.
“The CCPN social mobilizers told me about family planning and I told my husband. He encouraged me to do it. They didn’t collect money from me and it was not painful,” she told NHO.
These stories no doubt confirm a research showing that every minute, 380 women become pregnant. Some time, 190 women face unplanned or unwanted pregnancy, 110 women experience a pregnancy-related complication and another 40 women have unsafe abortion. The research proves that 116 women die every day in Nigeria from complications of pregnancy, labour or childbirth.
Unfortunately, the national contraceptive prevalence rate (CPR) or the percentage of women who are currently using, or whose sexual partner is currently using at least one method of contraception, regardless of the method used, is just 15.1%.
The above figures are reasons people like Sylvia Utulu, social mobilizer consultant, NURHI are working tirelessly to educate Nigerians to embrace FP. And she confirms that the activities have been very enlightening and welcoming.
She further explained that NURHI works in 10 local governments in Lagos. “I handle Ajeromi Ifelodun, and I know we have more family planning users here than other places. Every day when we walk in here, we find at least five clients coming in for one family planning method,” she said.
Interestingly, most women according to Utulu go for implant whereas men go for condom in Ajeromi Ifelodun.
“In fact some of the women that are now on the implant had called me aside and told me that this is what they need because they are tired of having kids. Then for the men, you know it’s difficult for you to come back home and put money on the table and you don’t have a source of income, it leads you to so many things like being alcoholic or depressed. Then when you hear condom is free of charge and you can collect as many as you want, they are eager to know the place. ”
On the impact of family planning in Ajeromi Local Government Area, Utulu said: “We have less cases of abortion, unwanted pregnancy, because people now know if you are not ready to have your family and you are sexually active, there is a way out, you come and plan your life. We always encourage that both spouses come for family planning.”
Also explaining the benefits of family planning is the Chief Nursing Officer at Ibafon PHC, Mrs. Cecilia Oluborode.
“FP is very interesting. It reduces conflict in the home as a result of some women not allowing their husbands to meet them. Such quarrel often come to an end when they do FP.
“My husband, for instance, is always proud of me and says it anywhere he goes, I am always ready for him so it has been good for me.”

Mrs. Oluborode reveals that most women prefer injectable. “Most durable include implant, javiel. The implant lasts for three years. Some who are interested in just spacing their children do it for three years,” she said.
She however corrected the myths and misconception about FP. “Some women believe that FP will not allow them to give birth again. But we tell them it’s not so, I use myself as an example. It also does not cause miscarriage
Explaining some of the activities of NURHI in the recent past Utulu said: “This is our second phase from 2016 to 2020. Basically we’ve been here for seven years going to eight years because we’ve had the first phase which is five years and this is another phase for another five years. We are in the second year of the five years. We were not in Lagos for the first phase. We were in Oyo, Kaduna, and Kwara State so now we’ve added Lagos to the second phase.
“I know we’ve had a tremendous impact in the communities, in Lagos we are in 10 local government areas and one local government with five communities with five LCDAs. So if you look at our data you will see that there is tremendous impact in the community. People are now aware of family planning and the so called myths they used to have we’ve explain to them better.
As a social mobilizer, she explains her activities: “One of our activities is community engagement. We bring the community together, basically 200 in number, with community leaders in attendance. We sensitize the community about family planning. “Then the OIC and FP managers also come to the community to discuss all the family planning methods that we have and answer questions from members of the community. The religious leaders are also part of this initiative; the Imams and Pastors, they go back to their congregations to sensitize them too.”
Nurse Oluborode also corroborated that women in the area are happier because they don’t have to pay or buy FP commodities. They are provided free of charge by NURHI. “Now, we are able to do better as we record about 15-30 women daily coming for FP,” she confirms.
She has a piece of advice for men: “As a man, if you have four children, you will be able to take care of them better than when they are  10. You get to save money and take good care of your wife. When women give birth continuously, they look older, weak and lose a lot of blood.”