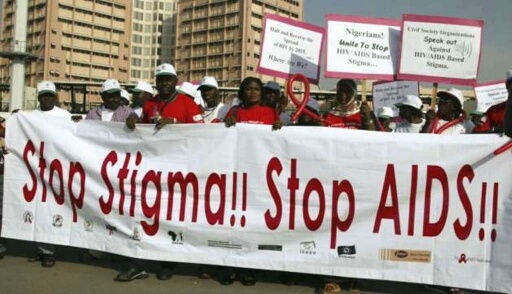 Tired, frail from starvation and sorrow, 28-year old HIV positive Vivian Onyebueke looked so despondent when NHO visited her. Her life and joy seem to have faded the moment news of her HIV status leaked to friends and neighbours. Although Nigeria now has, a new anti-discrimination law, signed this February that should enable people living with HIV/AIDS to live normal lives without fear or discrimination, the law is yet to impact in any way on Vivian and others living with HV/AIDS in the country.

The mother of two told NHO how she and her two sons were forcefully evicted from their house in Otta Ogun State after it became known that her husband had died from HIV infection. Declaring her own status had worsened the disdain from neighbours who felt that she and her husband were simply reaping what they sowed.The new law has not stopped people from treating her like an outcast.

“The most painful is that my mum rejected me. My mum who is in South Africa with my siblings had flown down to see me after the death of my husband. When she found out I too had HIV, she simply went back without offering any assistance. Her anger was because I married my husband despite her dislike and refusal to accept the union. She said I was a disobedient child who was getting her repercussion”, she lamented.

Indeed, life turned sour for Vivian after she spent all she had taking care of her husband when he was sick.

“After his death, I had to sell off our shop and the goods, so I could raise money for his burial and our upkeep” she said. Her only regret she added, was declaring her status openly for people to mock and taunt her. Today, many HIV positive people, out of fear of discrimination, don’t have Vivian’s audacity to bravely declare their status and seek treatment; instead they chose to live in denial.

Mrs Akinterinwa Temitope, a health worker at Agege Primary Health Centre told NHO how a staff of the health centre recently died of HIV even when she could could have easily obtained free antiretroviral drugs from the centre. This was rather shocking to many who wondered why the staff never revealed her status so as to access free ARV treatment. Obviously, the lady chose to hide her status out of fear of discrimination.

Mrs Akinterinwa revealed that the local government lost no fewer than four staff last year from HIV. According to her, the Local government frequently organises awareness rally on HIV, distributing free condom to residents of the local government and educating them on HIV/AIDS. Despite these, she said, young people continue to die due to refusal to get treatment at the early stage, not going for test and hiding their status out of fear of discrimination.

Earlier this year, former President Goodluck Jonathan signed the new anti-discrimination bill into law. The Act makes it illegal to discriminate against people based on their status. It also prohibits any employer, individual or organization from requiring a person to take HIV test as a pre-condition for

employment or access to services. But despite this law, discrimination against people living with HIV/AIDS is still high in Nigeria.

“The impact of this law is yet to be felt. We are still being discriminated against at work and at home”, says Ibrahim Umoru, Immediate past coordinator, Network of People Living with HIV/ AIDS in Nigeria, (NEPWHAN), Lagos Chapter. Umoru, says there is a need to educate the people about the new law. “When you make a law, you are making it for the people. People need to be aware of this law. Up till now, the provision of this law is still not stipulated as part of the constitution, the content of the law is not yet revealed and no one knows anything about it.”

According to the World Health Organisation (WHO), Nigeria has 3.1 million persons living with HIV/AIDS which is the second largest in the world after South Africa with 5.6 million. Most worrying is the fact that 70% of people living with HIV/AIDS in Nigeria fall into the most productive segment of the population, within the 20-39 age bracket.

The implication of this trend is that the nation runs the risk of her workforce being depleted by the disease if drastic steps are not taken urgently to reverse the spread of the disease. However, some others are hopeful that the new law will still create a more supportive environment for People Living With HIV/AIDS.

“The signing of the anti-discrimination law by the President of the Federal Republic of Nigeria is a much welcome action in the fight against AIDS. It will help more Nigerians to seek testing, treatment and care services without fear of facing stigma and discrimination”, said John Idoko, Director-General, National Agency for the Control of AIDS. UNAIDS Country Director for Nigeria, Bilali Camara, also believe the new law has given all Nigerians living with or affected by HIV a guarantee to access justice and to regain their human rights and dignity in society while enjoying productive lives.