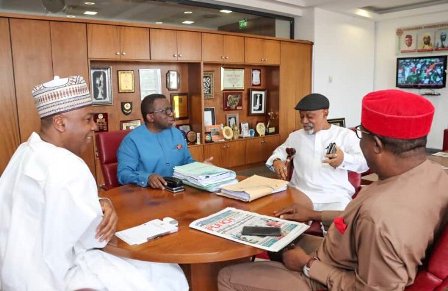 The Senate has intervened in the ongoing industrial action embarked upon by the Joint Health Sector Unions (JOHESU), in a bid to end the strike and make the nation’s hospitals functional once again.

The President of the Senate, Dr. Abubakar Bukola Saraki, after a meeting with the leadership of JOHESU yesterday where he listened to their grievances and demands, today, Friday May 25, met with the Minister of Health, Prof. Isaac Adewole and the Minister of Labour, Dr. Chris Ngige, to hear their own side of the issue.

While meeting with the JOHESU leadership led by its Chairman, Comrade Biobelemonye Joseph, the President of the Senate, had pledged that the Senate would ensure that the right thing is done to end the strike.

Chief Press Secretary to the President of the Senate, Sanni Onogu, in a statement in Abuja, said Saraki’s meeting with Adewole and Ngige was meant to hear their side of the issue and to forge a way forward, not only to end the strike but to ensure that there is lasting peace and industrial harmony in the nation’s health institutions.

During his meeting with the leadership of JOHESU, Saraki said the Senate and indeed the National Assembly, would ensure that the right thing is done to end the strike.

He noted that it is not in the interest of the country to have its hospitals closed while he pledged that the Senate would work with all stakeholders to ensure that the strike is called off.

Saraki said: “Our interest here in the Senate and the National Assembly in general, is to find a solution to this problem. It is not in the interest of the country for us to have our hospitals closed and we must work to ensure they are reopened promptly.

“I have heard your remarks, I will spend sometimes to discuss with you and get more details to see how we can put an end to this strike.

“On our own part, we will bring all parties involved together to ensure that where commitments have been made, those who made the commitments honour them.

“The only thing I can assure you is that we will make sure that the right thing is done and that this matter is resolved,” he said.