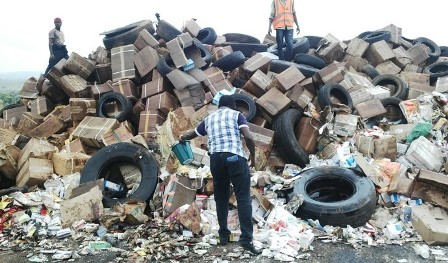 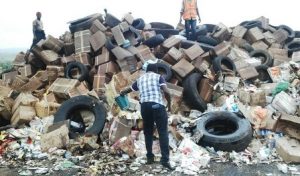 The National Agency for Food and Drugs Administration and Control (NAFDAC) has in its recent operations in Gembu, Taraba State, impounded unregistered drugs worth N15 million.
The impounded drugs included Tramadol and Sildenafil combination.
Joseph Asikpo, the state coordinator of the agency, made this known at a media briefing in Jalingo on Friday.
According to him, the drugs were evacuated in 20 sacks and seven cartons from some hidden stores in the area.
He said that the Tramadol and Sildenafil combination was an unregistered drug used by people in the area to enhance sexual performance.
“The problems associated with Tramadol alone outweigh its benefits because its indiscriminate use causes serious bodily harm.
“This is because the drug has addictive tendency and it is responsible for several violent behaviour we see on the streets today,” Mr. Asikpo said.
The coordinator said that other illegal drugs seized included banned Analgin and Gentamycin injections, fake Swidar and Ampiclox tablets, fake Mixagrip, different brands of Nimesulide, among others.
He said that the agency had imposed administrative charges on Amatex, Emmy CY and Aleke patent medicine stores in the area for being in possession of the illegal drugs.
Mr. Asikpo said that the patent medicine stores must pay the charges, assuring that the illegal drugs would be destroyed soon.
The coordinator vowed to sanction any trader found selling any banned consumable in the state.
“We are continuously carrying out mop up of commonly used but banned products such as Crusader, Mekako, Montclaire and Amirah soaps and other mercury containing products.
“These products are causative agents for skin cancer and kidney problem,” Asikpo said.
He advised the general public to always check the expiration dates and NAFDAC registration number of products before consumption.
Mr. Asikpo appealed to consumers to always report anyone found selling expired drugs or beverages to the agency for quick action.
(NAN)