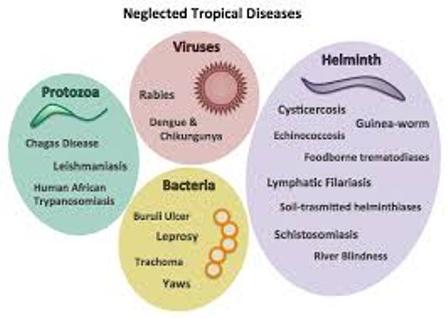 A scorecard by the African Leaders Malaria Alliance (ALMA) showed that Nigeria had mass treatment coverage index of 48 per cent for Neglected Tropical Diseases (NTDs) in 2016, ranking it 17 out of 47 countries.

NTDS are a mixture of treatable and preventable diseases that place heavy burden on over one billion people on the planet. They include lymphatic filariasis (commonly known as elephantiasis), onchocerciasis (known as river blindness), schistosomiasis (known as snail fever and bilharzia), soil-transmitted helminthes, trachoma (commonly known as ophthalmia or granular conjunctivitis) and guinea worm among others.

The ALMA, for the first time in its annual scorecard on disease progress had added NTDs in its presentation at the 30th African Union Heads of State Summit held in Addis Ababa, Ethiopia, on Sunday.

The scorecard, which is reviewed by African heads of state every year, put NTDs alongside malaria and maternal and child health as top health priorities for the continent.

A statement by Uniting to Combat Neglected Tropical Diseases, said that the index reported progress on the five most common NTDs including lymphatic filariasis, onchocerciasis, schistosomiasis, soil-transmitted helminths and trachoma.

“Developed by the World Health Organisation in collaboration with Uniting to Combat NTDs, this index reports progress for the 47 NTD-affected countries in sub-Saharan Africa.

“It reports their strategies to treat and prevent the five most common NTDs which are lymphatic filariasis, onchocerciasis, schistosomiasis, soil-transmitted helminths and trachoma.

“By adding NTDs to the scorecard, African leaders are making a public commitment to hold themselves accountable for progress on these diseases,’’ the statement said.

The statement quoted Hailemariam Desalegn, Prime Minister of Ethiopia, as saying, “Improving the health, education and productivity of our poorest citizens by eliminating NTDs can put Africa on the path to prosperity and universal health coverage.

“I urge my fellow African leaders to build on the progress already made and increase their efforts to tackle NTDs to make them a subject for much concerted effort and action at the African Union,’’ Desalegn said.

“When it comes to diseases that affect the very poorest and most marginalised communities, it is up to political leaders to make them a priority.

“We are thrilled that African Heads of State will be reviewing their progress every year and holding themselves accountable for equitable health outcomes,’’ said Elphick-Pooley.