WHO intensifies support as Nigeria steps up cross border immunizatio 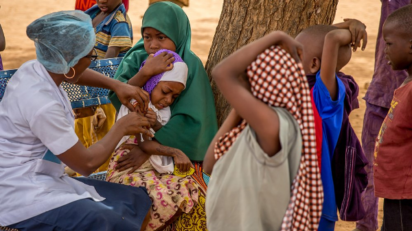 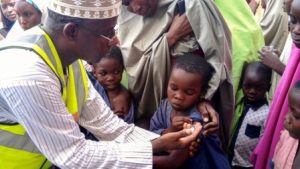 In renewed efforts to vaccinate children traversing in and out of Nigeria, the World Health Organization (WHO) is supporting the government in an initiative to improve supplemental and routine immunization activities in the North Western region, which has a significant nomadic population.

Nomadic pastoralists live beyond the reach of established health care programs that are designed to serve sedentary populations. As a result, these groups are often under-immunized and out of the reach of existing disease surveillance activities.

Speaking on the intervention, Mallam Gwanda Mairakuma of Maiadua local government in Niger Republic said that, “with this intensified commitment, vaccination activities have reduced the number of complications associated with Measles infection on our children”.

Difficulties have been experienced in the past in tracking and reaching nomadic populations with services such as sensitization on early disease reporting, immunization activities and access to general healthcare services due largely to the nature of their movement, which often involves settling in hard-to-reach transit camps.

Reaching the nomadic population in the cross border areas of the North Western region has been particularly difficult due to the nature of the population which involves settling in hard-to- reach and sometimes security compromised areas, making the zone the highest with under-immunized children in the country.

Jigawa and Katsina states in particular are maximizing efforts in reaching these populations by identifying major migrant groups and characterizing the movement of nomadic populations in the region for effective administration of vaccines.

In collaboration with Katsina State government, WHO has intensified efforts to reach nomadic communities across the state with immunization services, sensitization on prompt disease reporting and on the need to access health care services.

These communities are among the most marginalized, hard to reach and nomadic in nature who migrate across LGAs, States and international borders due to their transitory movement and settlement in camps and hamlets.

The State conducts series of activities to enhance immunity and interrupt transmission of Polio and other priority diseases along transit exit points and settlements with nomadic routes through immunization. Jigawa State also shares international borders with Niger republic in two LGAs namely, Sule tankarkar and Maigatari.

“WHO Nigeria supported a 10km strip vaccination along Nigeria-Niger border, using mOPV2 in October 2018 which was conducted along with vaccination at border cross points in March through April 2019,” says Dr Audu Sunday, WHO Jigawa State Coordinator.

“WHO has also supported Jigawa state to establish in-between round vaccination teams providing routine immunization, polio vaccination and Measles vaccines along the border cross points as well as the Maigatari international market.

Disease surveillance officers of both countries also conduct joint visits to health facilities in communities at the border using Standard operating procedures for cross border notification of VPDs,” he adds.

In Katsina state, 1,645 eligible nomadic children were reached during nomadic vaccinations in Ingawa and Maiadua LGAs between April and June 2019 from the conduct of Outbreak Response (OBR) and in between rounds, respectively.

Meanwhile, for in-between round activities at the border 10,183 children received bivalent oral polio vaccine (bOPV) while 3,358 were vaccinated with Inactivated Polio Vaccine (IPV) as well as 1,035 with measles vaccine.

“We are happy with WHO’s support and encourage health workers to take the opportunity to improve routine immunization coverage across the State.”