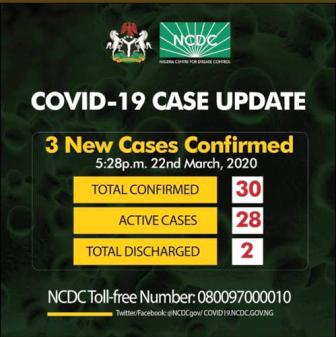 319
Share
In what could be a partial nluck down for Nigeria’s commercial capital, Lagos State Governor, Mr. Babajide Sanwo-Olu, today ordered Civil Servants in the lower and middle cadre (Grade Levels 01-12) to stay at home starting from tomorrow, 23 March 2020 for the next 14 Days as a further precautionary move to curb the spread of CoVID-19.

The Governor also  announced  that three more cases of the deadly virus have been reported in the state on Sunday, apart from 19 confirmed cases in Lagos.

Updates from the  Nigerian Centre for Disease Control (NCDC) as at Sunday March 22 by 45.28 pm local time shows that the country now has 30 confirmed cases, (28 active and 2 discharged cases)

The Governor called on residents to maintain social distance while calling on those who have just returned from foreign trips to observe self isolation for 14 days
The government also appealed to the private sectors to cut the number of people working at every point in time.
The government also called on retired doctors and nurses to assist health workers in containing the situation.
CoronavirusLagosLock down
319
Share