Artisanal gold mining: over 850,000 Nigerians at risk of mercury poisoning 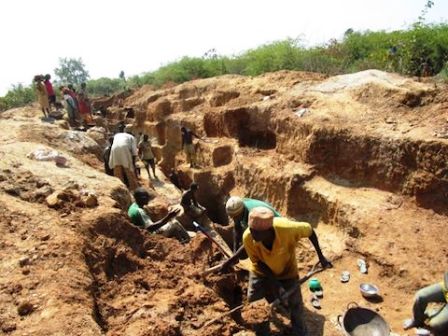 ABUJA – No fewer than 850,000 people are at risk of mercury poisoning in 12 states of Nigeria where people are involved in small-scale gold mining, experts at a one-day health sensitization programme in Minna, Niger state have revealed.

This follows disclosures that artisanal and small-scale gold mining (ASGM), a major source of income generation least in at least 12 states in the country, particularly Niger, Osun and Zamfara has also been identified as the main source of the largest release of mercury emissions around the world

The assessment will be used by the country to develop a National Action Plan (NAP), which clearly identifies public health implications of the mining activities in gold mining communities and countrywide and strategies for actions needed to reduce the public health impact.

In his remarks, Mr Fatai Olarenwaju, of the Federal Ministry of Health (FMOH) noted that one important component of the NAP will be that of empowering local communities for action. “There is a need to sensitize mining communities in order to increase their awareness and enable them to take local action on minimizing the effects of mercury on human health”, he reiterated.

WHO is supporting FMOH to conduct the assessment in two states, namely, Niger and Osun in collaboration the ministries of Environment as well as Mines and Steel Development. Others are Global Environment Facility (GEF), United Nations Industrial Development Organization (UNIDO) and the Swiss Tropical Institute.

“In addition to the assessment in the two states, WHO is also supporting the FMOH to build capacities of health workers on management of mercury poisoning and on environmental health activities that need to be periodically carried out to monitor and reduce health risks of ASGM,” says, Dr Clement Peter, WHO Officer in Charge (OiC).

“WHO will continue in its role to provide technical guidance to Nigeria on safe management of chemicals of public health importance and strengthening the capacity of FMOH in the implementation of the provisions of Minimata Conventions on Mercury,” the OiC adds.

In March 2019, FMOH and WHO identified some communities in the 12 States mentioned earlier at the highest risk of poisoning from mercury as a result of ASGM. In Niger State for instance, many women have complained that the waters in the community are contaminated with strange substances.

“We’ve noticed the water has some strange particles and we have reported to the authorities,” says Hajiya Khadija Balama, a community leader from Galadima, Shiroro Local Government Area (LGA) of Niger State.  “The taste of our water has drastically changed, the colour seems darker and the texture is thicker than usual. We are scared that this water can cause diseases and affect our livestock if care is not taken,” she says.

Unknown to Hajiya Balama and the women in her community, the particles they describe are residues of mercury, popularly used in mining activities in Shiroro LGA – a very popular ASGM town in Niger State, North Central Nigeria.

Exposure to mercury poses great danger to human health including toxic effects on the nervous, digestive and immune systems, including sensitive organs such as the lungs, kidneys, skin and eyes and may pose serious health threats to unborn babies and children under the age of five.

Committed to promoting and serving vulnerable populations, WHO is supporting countries, including Nigeria, to implement the Minamata international Treaty on Mercury, designed to protect human health and the environment from mercury pollutants and emissions.