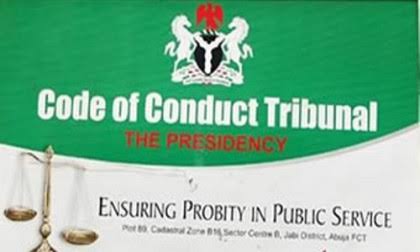 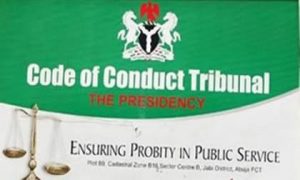 The former Custom Controller was arraigned before the tribunal in Abuja following two separate petitions that he did not declare his assets while in service.

Testifying at the commencement of the trial, Prosecution Witness, Mrs Kahinde Balogun, a staff of the Intelligence Investigative and Monitoring unit of the Code of Conduct Bureau told the two-man panel, chaired by Justice Danladi Yakubu Umar, that her office in Abuja, received two petitions from Isale Eko Youth Movement and Messrs Amobi Nzelu & Co, a law firm.

‘‘In March 2010, two petitions were received by Code of Conduct Bureau, against the defendant. The first petition was written by Isale Eko Youth Movement, alleging amongst other things, that the defendant owns some properties in various places, including GRA Ikeja, in Lagos state. The second petition was written by a law firm, Amobi Nzelu & Co, alleging non-declaration of asset.”

She told the tribunal that her department in the headquarters, upon the receipt of the petitions, instructed its office in Lagos, to carry out preliminary investigations of the alleged properties in Lagos.

Mrs Balogun disclosed that her department in the headquarters also sought confirmation from the Bureau Asset Department on the status of the defendant’s assets declaration.

According to her, reports from the Lagos office investigation revealed that the ownership of the properties could not be ascertained while the Assets Department in the headquarters responded that the defendant had not declared his assets with the Code of Conduct Bureau as required.

She tendered the first petition by Isale Eko Youths Movement, and other documents.

But the defence counsel, Mr Lanre Ogunlesi (SAN), objected to the admissibility of the documents on the ground that they were photocopies and not certified copies as required by the Evidence Act.

After a prolonged arguments, the litigants from both sides, agreed on the admissibility of the documents as exhibit, so that the trial could proceed without delay, on the condition that the prosecution would make a proper submission at a later date.

Gonorrhoea is becoming untreatable, WHO warns