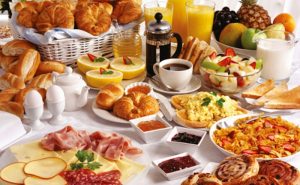 • You may end up with weight gain, diabetes, other diseases if you skip it, endocrinologist says

Are you one of those who think skipping breakfast is a good way to lose weight? You may have to think again. An endocrinologist, Dr. Afoke Isiavwe says skipping breakfast could be a recipe for weight gain and may increase your risk of diabetes.
This is because, according to her, breakfast skippers tend to eat more than usual at the next meal. Again, she said, those who skip breakfast often end up eating junks and snacks with soft drinks to stave off hunger. According to her, such snacks are unhealthy because they contain a lot of calories and sugars which inevitably increase individual’s blood sugar level and a chance of developing diabetes.
Report by the International Diabetes Federation, IDF, says Nigeria has the highest number of persons with diabetes and also the highest number of persons with impaired glucose tolerance in Africa.
“Every six seconds, a person dies from diabetes in the world today. Worse still, lots of people with diabetes are not aware they have diabetes. This is because diabetes shows no symptoms so someone with diabetes will not realise he or she has diabetes until the person develops a stroke or foot ulceration from the disease. And by that time, the cost of managing and treating the disease will become high”, she said.
She stressed that eating a healthy breakfast would help in reducing the risk of developing type 2 diabetes. According to her, most Nigerians choose unhealthy breakfast instead of the healthy foods.
“A typical Nigerian would choose Agege or white bread instead of the wheat bread which is healthier. They would prefer fruit juice or smoothies which has lots of calories over water” she said.
Other unhealthy breakfast options, according to her would include; sugar sweetened beverages, sugar sweetened yogurts, fried foods such as puff puff, buns, chin chin, fried foods and small chops, flavoured packaged milk and noodles.
She added that healthy breakfast is also essential for those already living with diabetes because it will help them to achieve better control of their blood sugar level.
Her recommendations of healthy breakfast include: water instead of beverages with sugar, eat at least 3 servings of green vegetables a day; efo, ugwu, efirin, lettuce, bitter leaf, water leaf, spinach, shoko, tete, moringa.
“Take three servings of fresh fruits everyday such as garden eggs and carrots. Choose nuts, and a piece of fresh fruits for snacks instead of pastries, limit your alcohol intake, eat lean or poultry meat instead of red or processed meat”
She also advised cooking with small amount of unsaturated oil like sunflower oil, Olive oil, corn oil, canola oil, instead of large amount of saturated oil like palm oil.
Research carried out at Queen Margaret University, Edinburgh has shown that eating breakfast cereal in the morning helps aid weight loss. This is because when you skip meals, you will get so hungry that by lunchtime you will eat more meal.
The research concludes that breakfast is the most important meal of the day because it provides energy to start a new day and is linked to many health benefits such as weight control and improved performance. Additional Studies by the American Dietetic Association, says children who eat breakfast perform better in the classroom and on the playground, with better concentration, problem-solving skills, and eye-hand coordination.