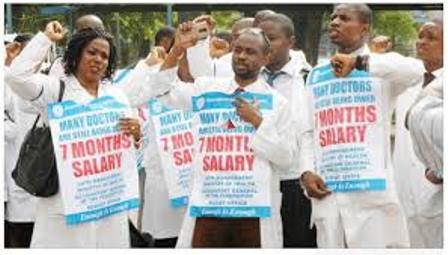 ABUJA – The executives of the National Association of Resident Doctors (NARD) early Thursday announced the suspension of its ongoing strike.

Rising from a marathon  meeting of its National Executive Council in Abuja, NARD said it suspended the strike to enable it re-assess situations which necessitated the strike and agreements it consequently reached with government while the strike lasted.

The suspension notice was contained in a text message by the doctors, forwarded to newsmen by Minister of Labour and Employment, Chris Ngige, Thursday morning.

The message signed by the NARD President, John Onyebueze reads:

“The National Executive Council of NARD met from 6pm,Tuesday, 12th September to 12:15am, Thursday, 14th September 2017 to review the status of our nationwide strike and the offer from Government in the re-negotiated Memorandum of Terms of Settlement (MTS) with Government.

“After due consideration of the efforts by Government and progress made in addressing the items on the notice of our ultimatum, and strike, as well as implementing the contents of the re-negotiated MTS, NARD resolved to suspend her 10 days strike, and to reaccess situation in two weeks at our AGM in Abuja.

“We sincerely thank the public, press and our families for their support during this period of strike.”

But crises in the sector may continue next Wednesday as the Joint Health Sector Unions (JOHESU) has also decided to call its members to embark on a nationwide strike from September 20.

The group said the planned action was due to government’s failure to meet its demands.

The group which claims to be representing  about 95 percent of employees in the sector has notified the National Assembly and the Federal Government of its planned action.

Nigerian health professional bodies  in public have knacks for alternating strikes to make demands from government.

As government meets the needs of a group, others promptly resort to down tools, being the most effective way to compel government to meet needs of its employees.

Sensing the damage the impending strike would cause the nation, the Federal Government on Wednesday appealed to the workers to shelve the planned strike to enable the parties resolve the bones of contention amicably.

Others are: failure to enrol and capture the doctors on Integrated Personnel Payment Information System (IPPIS); failure to budget, deduct and remit both the employer and employees’ contributions the doctors’ pension to their retirement savings account since 2013.

The Government has pledged not to punish the doctors for participating in the strike in as much as they call it off promptly.

In the health workers letter, titled “Looming Nationwide Industrial Action: Request for Audience,”  and signed by JOHESU’s National Chairman, Joy Josiah, and its National Secretary, Ekpebor Florence , the group is requesting for  audience with the Senate President, Bukola Saraki and Speaker, House of Representatives, Hon Yakubu Dogara,  next Wednesday and Thursday, respectively on their demands.

The letter reads: “We write on behalf of the leadership of Joint Health Sector Unions and Assembly of Health Care Professionals, a body which makes up about 95 per cent of health workers and health care providers, to seek for your intervention in the protracted demands and agitations between JOHESU and the Federal Government since 2014 by granting us urgent audience on Wednesday, September 13, at 10 a.m. or any other date not later than a week before September 30.

“We are compelled to seek for your intervention so as to avert indefinite industrial action in the health industry. We are aware of the sensitive and important nature of our service to human lives, hence our proactive measure in prevention rather than curative.

“JOHESU is aware of your recent laudable role in intervening and resolving of the issues of the medical doctors while they were on strike.

“While thanking you for your kind approval to meet with us on September 13, accept the assurances of our best wishes.”

However, the Minister of Health Prof. Isaac Adewole has urged  the workers to soft-pedal on their decision. A statement from the ministry signed by the director, Media and Public Relations, Mrs Boade Akinola reads: “The Honourable Minister of Health, Professor Isaac Adewole has appealed to the leadership of the Joint Health Staff Union (JOHESU) to prevail on their members to shelve their planned strike action.

“Professor Adewole said government has continued its negotiation with the Union and hoped that issues in contention will be addressed through consensus.

“The Minister further urged them to consider the interest of Nigerians who are the ultimate victims of the strike action.

“The Minister assured the JOHESU Leadership of the commitment of President Muhammadu Buhari to the well being of all Nigerians, including the welfare of stakeholders in the health sector.”