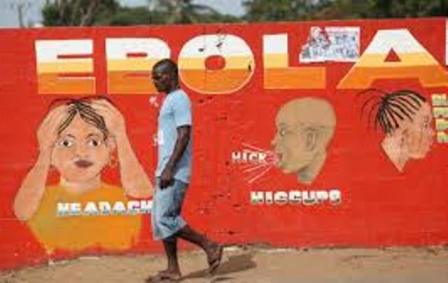 The Federal Executive Council (FEC) on Wednesday directed the Federal Ministry of Health to step up surveillance team against the deadly Ebola .

According to him, the Council ordered steps to be taken to keep the Ebola outbreak in Democratic Republic of Congo (DRC) from coming to Nigeria.

He said that part of the new measures to be taken is screening passengers coming into the country.

“We want to assure Nigerians that the government is determined to keep the country safe.” he said.
The Government of the Democratic Republic of the Congo had, on Tuesday May 8, declared a new outbreak of Ebola virus disease (EVD) in Bikoro in the country’s Equateur Province. The outbreak declaration occurred after laboratory results confirmed two cases of EVD.

The Ministry of Health of Democratic of the Congo (DRC) informed WHO that two out of five samples collected from five patients tested positive for EVD at the Institut National de Recherche Biomédicale (INRB) in Kinshasa. More specimens are being collected for testing.

A statement from WHO said the organization is working closely with the Government of the DRC to rapidly scale up its operations and mobilize health partners using the model of a successful response to a similar EVD outbreak in 2017.

“Our top priority is to get to Bikoro to work alongside the Government of the Democratic Republic of the Congo and partners to reduce the loss of life and suffering related to this new Ebola virus disease outbreak,” said Dr Peter Salama, WHO Deputy Director-General, Emergency Preparedness and Response. “Working with partners and responding early and in a coordinated way will be vital to containing this deadly disease.”

The first multidisciplinary team comprised of experts from WHO, Médecins Sans Frontières and Provincial Division of Health travelled today to Bikoro to strengthen coordination and investigations.

Bikoro is situated in Equateur Province on the shores of Lake Tumba in the north-western part of the country near the Republic of the Congo. All cases were reported from iIkoko Iponge health facility located about 30 kilometres from Bikoro. Health facilities in Bikoro have very limited functionality, and rely on international organizations to provide supplies that frequently stock out.

“We know that addressing this outbreak will require a comprehensive and coordinated response. WHO will work closely with health authorities and partners to support the national response. We will gather more samples, conduct contact tracing, engage the communities with messages on prevention and control, and put in place methods for improving data collection and sharing,” said Dr Matshidiso Moeti, the WHO Regional Director for Africa.

This is DRC’s ninth outbreak of EVD since the discovery of the virus in the country in 1976. In the past five weeks, there have been 21 suspected viral haemorrhagic fever in and around the iIkoko Iponge, including 17 deaths.

“WHO is closely working with other partners, including Médecins Sans Frontières, to ensure a strong, response to support the Government of the Democratic Republic of the Congo to prevent and control the spreading of the disease from the epicentre of iIkoko Iponge Health Zone to save lives,” said Dr Allarangar Yokouide, WHO Representative in the DRC.

Upon learning about the laboratory results today, WHO set up its Incident Management System to fully dedicate staff and resources across the organization to the response. WHO plans to deploy epidemiologists, logisticians, clinicians, infection prevention and control experts, risk communications experts and vaccination support teams in the coming days. WHO will also be determining supply needs and help fill gaps, such as for Personal Protective Equipment (PPE). WHO has also alerted neighbouring countries.

WHO released US$ 1 million from its Contingency Fund for Emergencies to support response activities for the next three months with the goal of stopping the spread of Ebola to surrounding provinces and countries.

WHO launches campaign against cholera in five African countries