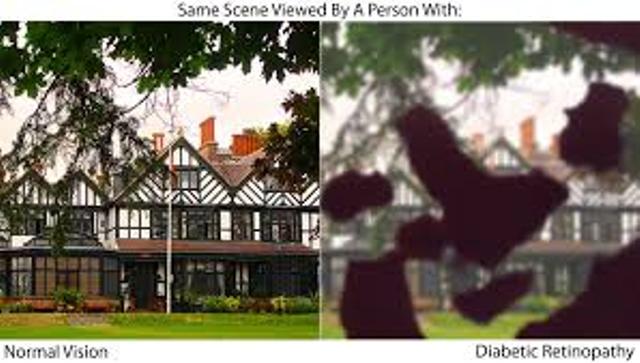 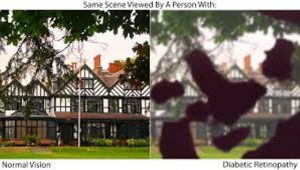 For the diabetics – experts say there are over twelve million of them in Nigeria – how they will control the disease to ensure that they avoid complications often associated with it is one big battle they have to fight all their lives.
Diabetes mellitus is a condition which impairs the body’s ability to use and store sugar. Elevated blood sugar levels, excessive thirst with an increase in urine excretion and changes in the body’s blood vessels are all characteristics of the disease.
One serious complication which the individual has to watch however is the effect of the disease on the eyes. This is because diabetes, according to experts, may cause serious changes in the eyes. Conditions such as cataract, glaucoma, occasional blurring and most importantly, changes in the blood vessels at the back of the eye may all affect he sight.
According to the American Academy of Ophthalmology, diabetic retinopathy is a complication of diabetes that affects the eyes. It is caused by the deterioration of the blood vessels nourishing the retina at the back of the eyes. These weakened blood vessels may leak fluid or blood, develop fragile brush-like branches and become enlarged in certain places.
The retina is that part of the eye where light filtering through the lens is focused. The focused light or images are then carried to the brain or fluid damages or scars the retina, the image sent to the brain then becomes blurred.
The American Academy of Ophthalmology says the risk of developing diabetic retinopathy is high for patients who have had diabetes for a long time. About 60% of patients having diabetes for 15 years or more, says the academy, have some blood vessel damage in their eyes.
When diabetes develop at an early age in childhood or teenage years, according to the Academy, it is known as juvenile diabetes and patients in this category are likely to develop diabetic retinopathy at an early age.
“Only a small percentage of those developing retinopathy however have serious problems with vision and even smaller percentage ever become blind.”
In spite of this, the Academy says diabetic retinopathy is the leading cause of new blindness among adults in the United States and diabetic patients are said to be 25 times more prone to blindness than non-diabetics.
Experts say there are two forms of diabetic retinopathy. In one form known as background retinopathy, blood vessels within the retina change. Some vessels decrease in size and others enlarge and form balloon-like sacs which obstruct the flow of blood through the vessels. These vessels leak and bleed, causing swelling of the retina or forming deposits called exudates. 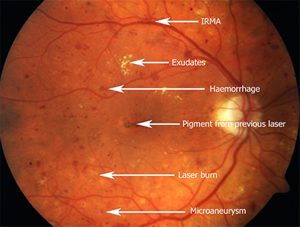 Background retinopathy is considered an early stage of diabetic retinopathy. Fortunately, according to the experts, sight is usually not seriously affected and the condition does not progress in about 80% of diabetic patients. In some cases, however, leaking fluids collect in the macula, the centre position of the retina which is responsible for central vision. Straight ahead images, reading and close work may then become blurred and loss of central vision can result in blindness.
Background retinopathy, according to experts is a warning sign and can progress to more serious sight-endangering stages.
The second form of diabetic retinopathy, according to the American Academy of Ophthalmology experts is proliferative retinopathy. This begins in the same manner as background retinopathy with the addition of new blood vessel growth on the surface of the retina at the optic nerve. This fragile new blood vessel may rupture and bleed into the vitreous, the clear gel-like substance that filtrates into the centre of the eye.
Experts say the cause of diabetic retinopathy is not completely understood, however, it is known that diabetes weakens small vessels in various areas of the body. Pregnancy and high blood pressure may worsen the condition in diabetic patients.
However, diabetes retinopathy can be detected before it causes blindness. The American Academy of Ophthalmology says a comprehensive medical eye examination by an ophthalmologist, the eye specialist, is the best protection against the progression of diabetic retinopathy.
Diabetic patients, according to the Academy should therefore be aware of the risks of developing sight disturbances and should have their eyes examined regularly. Even non-diabetics will also benefit from such eye examination as this may help in detecting the presence of diabetes and other diseases.
To detect diabetic retinopathy, the ophthalmologist painlessly examines the interior of the eye using an instrument known as ophthalmoscope. The interior of the eye may also be photographed to provide more information.
When diabetic retinopathy is diagnosed, the ophthalmologist considers the patients’ age, history, lifestyle and he degree of image to the retina before deciding on a line of treatment.
Diabetics and other individuals who may want their eyes tested for diabetic retinopathy should however note that only an ophthalmologist is trained and adequately equipped to conduct tests and treat diabetic retinopathy. It is not a condition that can be treated by the “eye specialists” along Broad Street or some obscure corners of Ikeja, Lagos!

Why we adopted Nigeria’s CDC for Africa – Amb Maiyegun