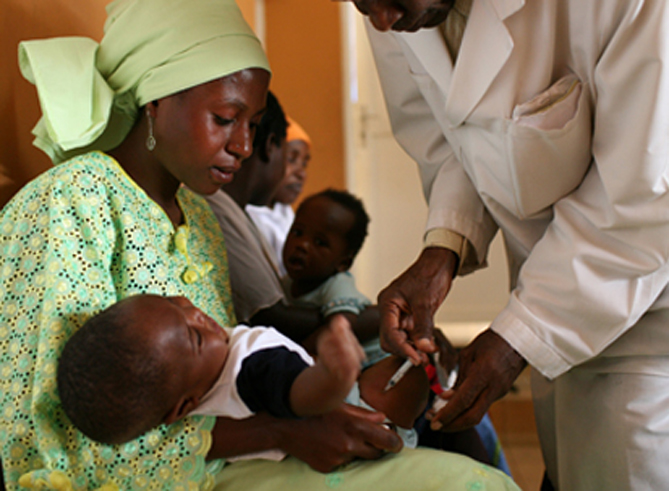 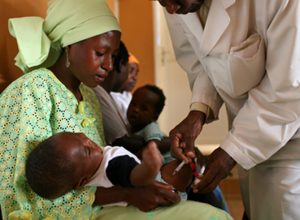 A new report on Africa’s immunisation coverage released by the World health Organisation (WHO) at the just concluded first-ever Ministerial Conference on Immunization in Africa held last week in Addis Ababa, Ethiopia has ranked Nigeria among countries with unimpressive record in routine immunisation coverage.
The country was not ranked among the Top-10 Best Performing Countries in Africa which included The Gambia, Ghana, Lesotho, Mauritius, Morocco, Rwanda, Seychelles, Swaziland, Tanzania and Tunisia but ranked among countries still being ravaged by neonatal tetanus which has been eliminated in some African countries.
Similarly, Nigeria was also listed by the report as one of the countries yet to eliminate measles or introduce the measles-containing vaccine (MCV2) into her routine immunization programmes as recommended by WHO. The report estimated that 48,000 measles deaths occurred in the African Region in 2014, representing 42% of global deaths due to the disease.
“Because measles is a highly infectious virus, its control requires more than 95% coverage with two doses of measles-containing vaccine (MCV) in all districts, administered through routine immunization or supplemental immunization activities (SIAs). Despite the WHO’s recommendation for a two-dose schedule, less than half (48%) of African countries have integrated MCV2 into their routine immunization programmes,” the report noted
The report however noted that Routine Immunization (RI) coverage has increased considerably across Africa since 2000 while measles deaths have declined by 86% between 2000 and 2014. Also, according to the report, the continent seems to have achieved considerable success in immunisation activities as a result of the introduction of new vaccines by some of the countries.
Again, Nigeria did not feature prominently among countries that have introduced such new vaccines, scoring 66% in DTP3 Coverage & Vaccine Introduction, below countries like Lesotho (96%), Kenya (81%), Ghana ((98%), Djibouti (78%),Burundi (95%), Benin (70%), Ethiopia (77%) among others.
The report also noted that one in five children in the region still do not receive all of the most basic vaccines they need as three critical diseases—measles, rubella and neonatal tetanus—remain endemic while many countries have fragile health systems that leave immunization programs vulnerable to shocks.
“Immunization is undeniably one of the most successful and cost-effective public health interventions available. Tremendous progress has been made to improve immunization coverage and introduce new vaccines in Africa. While many challenges remain, including the emergence of new infections and sustaining progress in the fight against polio, there are reasons to be optimistic.
“Political will and government funding for immunization are growing. Communities and civil society are increasingly recognized for their critical role in shaping immunization systems and improving vaccine coverage by increasing demand and holding governments accountable. In addition, new vaccines are on the horizon, including vaccines for malaria and Ebola. While children are typically the focus of routine immunization systems, vaccines have the potential to benefit individuals throughout life. Introducing vaccines intended for adolescents and adults could help reduce the burden of cancer and other major causes of deaths,” the report concluded.
The advocated political will and government funding for immunization however seemed to have received a boost at the ministerial conference following the ministers pledge to promote the use of vaccines to protect people of all ages against vaccine-preventable diseases and to close the immunization gap by 2020.
The conference, which was hosted by the World Health Organization (WHO) Regional Offices for Africa (AFRO) and the Eastern Mediterranean (EMRO) in conjunction with the African Union Commission (AUC), was the first-ever ministerial-level gathering with a singular focus on ensuring that children across the continent can get access to life-saving vaccines.
Part of the declaration signed by the Ministers reads:
We hereby collectively and individually commit ourselves to:
• Keeping universal access to immunisation at the forefront of our efforts to reduce child mortality, morbidity and disability, and in doing so help our countries achieve their long-term health, economic and development goals;
• Increasing and sustaining our domestic investments and funding allocations, including innovative financing mechanisms, to meet the cost of traditional vaccines, fulfil our new vaccine financing requirements, and providing financial support for the operational implementation of immunization activities by EPI programs;
• Addressing the persistent barriers in our vaccine and healthcare delivery systems, especially in the poorest, vulnerable and most marginalized communities, including the strengthening of data collection, reporting and use at all levels as well as building effective and efficient supply chains and integrated procurement systems;
• Increasing the effectiveness and efficiency, as well as changing the approaches as needed, of our immunization delivery systems as an integrated part of strong and sustainable primary health care systems;
• Attaining and maintaining high quality surveillance for targeted vaccine preventable diseases.
• Monitoring progress towards achieving the goals of the global and regional immunization plans
• Ensuring polio legacy transition plans are in place by end-2016 that will allow future health programs to benefit from the knowledge and expertise the polio program has generated through the eradication initiative;
• Developing a capacitated African research sector to enhance immunization implementation and uptake;
• Building broad political will, working with communities, civil society organizations, traditional and religious leaders, health professional associations and parliamentarians, for the right of every child and every community to have universal access to life-saving vaccines, and by extension the best possible chance for a healthy future;
• Promoting and investing in regional capacity for the development and production of vaccines in line with the African Union Pharmaceutical Manufacturing Plan including the strengthening of national regulatory authorities.