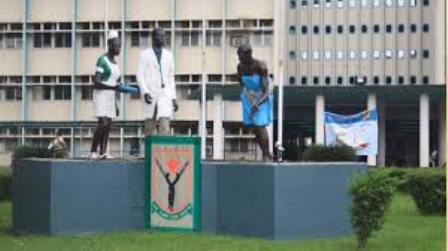 The Lagos University Teaching Hospital (LUTH) today confirmed the death of two patients from Lassa fever. Two others, one of them a doctor who took part in the autopsy, are currently on admission, the hospital said in a Press Release.

According to the statement, the two patients presented very late and died in spite of efforts to salvage them. The first was a 39-year old pregnant lady with bleeding disorder who died after a stillbirth. Post-mortem examination had been conducted before her Lassa Fever status was eventually suspected and confirmed.

The statement further reads: “No less than 100 different hospital workers exposed to this index case are currently being monitored. A resident doctor from the Department of Anatomic and Molecular Pathology who took part in the autopsy was later confirmed with the disease and is currently on admission and responding well to treatment at the Isolation Ward of LUTH.

“Prof Chris Bode, the Chief Medical Director of LUTH visited the Isolation Centre of LUTH yesterday in company of his Top Management staff and spoke with the doctor and staff to boost morale and assure them of the Hospital’s full support. He enjoined all LUTH workers to maintain a heightened level of alert in the wake of this new outbreak and observe universal precautions in handling all suspected cases of this viral hemorrhagic fever.”

The statement further disclosed that both the Lagos State Ministry of Health and the Federal Ministry of Health had responded swiftly to contain  current  outbreak by mobilising human and material resources to trace the sources and extent of the disease, follow up on potential contacts, identify early and test suspected cases.

“There are adequate materials for containment of the disease while drugs have been made available to  treat anyone confirmed with the disease. The Centre for Disease Control (CDC) in Nigeria has also been contacted. Two other suspected cases from  Lagos state are also presently admitted and quarantined while undergoing confirmatory laboratory tests.”

Yerumoh made the confirmation in an interview with the News Agency of Nigeria (NAN) in Igarra, the administrative headquarters of Akoko-Edo Local Government Area.

He disclosed that the patients were quickly admitted in the Surveillance Unit of the local government health care centre, when health personnel noticed that they displayed symptoms of Lassa fever.

“The patients were brought to the surveillance unit of the local government and their blood samples were positive.

“And in conjunction with the Institute of Lassa Fever Control at the Irrua Specialist Teaching Hospital, we quickly moved them to Irrua and we were able to contain the spread of the disease,’’ he said.

Yerumoh said the patients were currently responding to treatment at the Irrua Specialist Teaching Hospital.

Facts you should know about Lassa fever

What is Lassa fever?

Lassa fever is an acute febrile illness, with bleeding and death in severe cases, caused by the Lassa fever virus with an incubation period of 6-21 days. The virus, a member of the virus family Arenaviridae, is zoonotic, or animal-borne.  About 80% of human infections are without symptoms; the remaining cases have severe multiple organ disease, where the virus affects several organs in the body, such as the liver, spleen and kidneys. Lassa fever is a significant cause of severe illness and death.

Where is Lassa fever found?

It is an acute viral haemorrhagic illness caused by Lassa virus, first identified in 1969 in Nigeria. It is endemic in Benin, Guinea, Liberia, Mali, Sierra Leone, and Nigeria, with peaks in incidence closely related to seasonal patterns. However, because the rat species which carry the virus are found throughout West Africa, the actual geographic range of the disease may extend to other countries in the region.

The reservoir or host of the Lassa virus is the “multimammate rat” called Mastomys natalensis which has many breasts and lives in the bush and around residential areas. The virus is shed in the urine and droppings of the rats hence can be transmitted through direct contact, touching objects or eating food contaminated with these materials or through cuts or sores.

Who is at risk?

Lassa fever occurs in all age groups and both sexes. Persons at greatest risk are those living in rural areas where Mastomys are usually found, especially in communities with poor sanitation or crowded living conditions. Health workers are at risk if Lassa fever is not suspected or while caring for Lassa fever patients in the absence of proper barrier nursing and infection control practices.

The onset of the disease, when it is symptomatic, is usually gradual, starting with fever, general weakness, muscle and joint pains, prostration and malaise. After a few days, headache, sore throat, muscle pain, chest pain, nausea, vomiting, diarrhoea, cough, and abdominal pain may follow. In severe cases facial swelling, fluid in the lung cavity, bleeding from the mouth, nose, vagina or gastrointestinal tract and low blood pressure may develop.

Protein may be noted in the urine. Shock, seizures, tremor, disorientation, and coma may be seen in the later stages. Deafness occurs in 25% of patients who survive the disease. In half of these cases, hearing returns partially after 1-3 months. Transient hair loss and gait disturbance may occur during recovery. Patients may die from shock.

These tests can be done at Virology Reference Laboratory at Lagos University Teaching Hospital, Idi-Araba, Lagos.

The only known specific treatment for Lassa fever is Ribavirin which may be effective if given within the first six days of illness. It should be given intravenously for ten (10) days. Supportive treatment should include; Paracetamol, Vitamin K (Phytamenadione), Heamacel, Ringers lactate, antimalaria and antibiotics- start by I.V. If patient is severely anaemic, consider transfusion.

There is currently no vaccine that protects against Lassa fever.

In healthcare settings, prevention is by standard precautions where all blood and body fluids are considered potentially infectious. Standard precautions are applied to all patients at all times and in all health care settings. These include hand hygiene, use of appropriate personal protective equipment (PPE), waste disposal, cleaning and disinfection of medical equipment and environment, safe injection practices.