The Nigerian government on Monday April 8 declared a State of Emergency on maternal and child mortality in the country.

Also, the government announced that for every death of any woman related to childbirth,  it would henceforth provide toll-free numbers for Nigerians to call so it can take steps to investigate such deaths and respond within the ambit of the law, in order to raise the sense of accountability for such deaths.

He said the measures became necessary to enable the nation half the maternal and child deaths in the next two years, saying the number of children and mothers the country loses daily was equivalent to 16 crashed Boeing 737-300 series loaded with passengers, with all persons on board confirmed dead.

Shuaib justified his aircraft crash analogy by citing  the nation’s  maternal and child mortality figures from development partners working on health in the country, such as Save the Children, United Nations Children Fund, World Health Organization among others.

He said: “It is with deep sadness, but a sense of responsibility that I want to remind you of the following statistics for maternal and under-five child mortality in Nigeria.

“Every day in Nigeria, approximately 145 women die from preventable causes related to pregnancy and childbirth. This is equivalent to having one Boeing 737-300 series airplane, fully loaded with 145 women crashing every single day in Nigeria, and killing everyone on board.

“Every day in Nigeria, approximately 2,300 children under five years 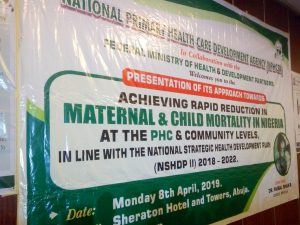 die mainly from preventable causes. Similarly, this is equivalent to having 15 Boeing 737-300 series airplanes, fully loaded with 145 children under five years old, crashing every single day in Nigeria, and killing all the children on board.

“One out of every 10 children less than five years old that dies in the world is a Nigerian. One out of every eight Nigerian children dies before having a chance to celebrate his or her 5th birthday.

“We are outraged by these statistics. It is notable that these deaths do not make daily headlines in the press, nor raise the same emotions as plane crashes, including the recent air mishap involving Ethiopian Airlines. This probably is because these deaths are occurring amongst the poor, most vulnerable and voiceless in our communities.”

According to him, in the last 25 years, Nigeria made the 5th worst progress among 20 countries that had the worst maternal mortality ratios by 1990.

Over the same period, war-challenged countries with wide-scale humanitarian crisis such as Afghanistan, Liberia, Sierra Leone and South Sudan made better progress than Nigeria, he stated.

“It is regrettable that there is no basis on which to compare Nigeria with more advanced societies in terms of maternal mortality. The truth is that in western countries, when a woman announces that she is pregnant, people immediately ask what the baby’s gender is. On the contrary, in Nigeria, we immediately wish and pray the woman a safe delivery, and in so doing, expose our heartfelt recognition of the reality that she is embarking on a dangerous journey,” the ED said.

He explained that at his presentation of 2019 Appropriation Bill to the National Assembly, President Muhammadu Buhari reiterated his “strong” desire to “establish a health system that prioritizes primary health care” so that millions of Nigerians could receive the health care they need with financial risk protection. This, he explained further, that the president demonstrated by providing 55 billion naira towards the Basic Health Care Provision Fund.

“From the foregoing, it is unconscionable for any of us to go to bed each night without a sense of urgency to reverse this trend, given our knowledge that these deaths are occurring amongst our mothers, aunties, children, relatives, neighbours, community members and citizens…We are convinced that if nothing drastic is done to reverse the trends, posterity will judge us harshly.

“Having noted the high rate of maternal, new-born and under-five child mortality, and the insufficiency of our efforts to reverse the trend, I hereby declare a state of public health concern on maternal, new-born and child deaths occurring at the primary health care and community levels, and a decision to establish a national coordination centre within the NPHCDA to provide oversight on RMNCAH+N activities at the primary health care level. This centre shall be called the National Emergency Maternal and Child Health Intervention Centre (NEMCHIC)…

“We commit to urgently take action to provide leadership to rapidly reverse maternal, new-born and child deaths by half by 2021 through interventions that target the primary health care and community levels.

“In collaboration with states, local governments, our traditional and religious leaders as well as development partners at all levels, we will coordinate and energize efforts that are focused on reducing maternal and child mortality at the PHC and community levels through the National Emergency Maternal and Child Health Intervention Centre (NEMCHIC) and its state counterparts.”

Health For All is possible, says WHO DG on World Health Day