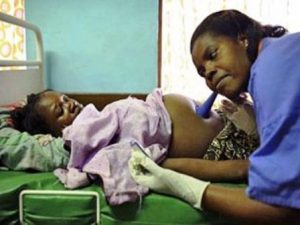 Every 12 minutes, Nigeria looses one woman to due to complications of pregnancy and this, according to WHO, UNICEF and UNFPA, resulted in the death of 58,000 women, in 2015 alone during childbirth.

These startling figures were released at a media preview of a documentary to sensitize the populace on the upsurge of child/ maternal death in Nigeria.

The documentary tagged, ‘’Ending the needless death of Mothers in Nigeria’’ was put together by Developmental Communications Network (DevComs) in conjunction with other civil society groups under the ‘Not Again campaign’ sponsored by Mac Arthur Foundation.

According to the documentary, some of the basic problems contributing to high mortality rate include : delay in accessing proper medical care, lack of access to necessary and required drugs, lack of skilled health workers, urban and rural dichotomy in resources distribution,
poor quality of health services at all levels, socio economic status, discrimination in economic distribution in access to medicare, absence of good governance, lack of ambulances in cases of emergencies, accurate treatment and lack of basic education, culture and
tradition among many other factors.

Speaking at the preview, Bolaji Adegbega, DevComs consultant for the project, the campaign is put together by the civil society organizations to stem or totally eradicate infant / maternal death. The documentary showed the near death first hand experiences of some women and opinions of experts and stakeholders on the issue.

Adegbega explained that the team relied more on practical experiences of these women rather than statistics, so as to sensitize the world about the poor state of our health facilities. The documentary exposed some of the lapses in our health care system, the lack of will by government to ensure that health policies are properly implemented, poverty, and ignorance on the part of the people, who in most cases don’t know what to do and sometimes leave it late.

Some of the women spoken to in the documentary like Mrs. Uchechi Achonu, Auwar Ali, Elizabeth Sambo and Praise Uloma – Omoyele narrated their near death experiences during child birth and their ordeal in the hands of some medical personnel’s.

Dr Tunde Segun – Country Director, Evidence for Change, said, one of the major discoveries of his advocacy group was the problem of accountability as the government are not held accountable to the death of people, due to lack of basic health facilities. He said that government does not have means of monitoring how these health facilities are used, despite making budgetary provisions for them. Dr Segun further revealed that the whole world measures how well Nigeria is doing in child/mother health care by how many women we lose.

Honorable Commissioner of Health Lagos State, Dr Jide Idris, listed some of the major contributing factors to the problem of maternal health care. He said the government has been collaborating with some medical missions to enlighten the people more through flyers and their various traditional rulers. Noting also that the government reach outmto the grassroots periodically through the local government councils, and educate them more on family planning and other ways to keep healthy.

‘’If you look at the number, that is more than 200 people dying per day,’’ she said, adding that the figure is frightening and not majorl reported unlike when a plane crashes and kills 200 people at once.

Akin Jimoh, the Executive Director DevComs Network, in his contribution said: ‘’maternal health should be everybody’s responsibility and we are all accountable for our women to survive. When you have a population where half are men and other half women. When women are dying in the process of giving life there is need to create awareness about this’’.

They all agreed that the health care system in Nigeria needs government’s urgent intervention. They also highlighted the benefits of the National Health Insurance Scheme which the experts believe is key in achieving safe health care delivery.

‘No reason clinical trials cannot be done in Nigeria’