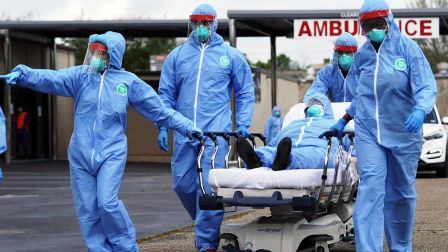 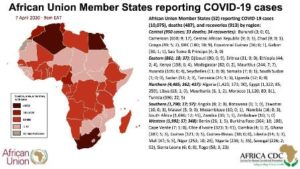 The number of COVID-19 cases rose in Africa today as 795 new cases were recorded by 52 Africa Union Member states as at 5pm EAT. The continent now has a total of 10,252 cases and  492 deaths.

Ahead of an expected surge in cases of COVID-19 in Africa, the African Union and the Africa Centres for Disease Control and Prevention (Africa CDC) have launched a public-private partnership with the AfroChampions Initiative, known as the Africa COVID-19 Response Fund.

A statement from the AU Directorate of Information and Communication in Addis Ababa, Ethiopia said “the partnership aims to raise an initial US$ 150 million for immediate needs to prevent transmission and up to US$ 400 million to support sustainable medical response to the COVID-19 pandemic  by pooling the resources required for the procurement of medical supplies and commodities; supporting the deployment of rapid responders across the continent as well as providing socio-economic support to the most vulnerable populations in Africa.”

The statement described the  Fund is a financial instrument to mobilise and manage funds from the private sector in Africa, and other well-wishers with the support of several African banks.

“The Fund will operate under the supervision of the African Union through its public health institution Africa CDC, which will determine priority interventions and actions.

“Priority actions will include the purchase and distribution of key equipment for diagnosis, treatment and protection of caregivers, as well as implementing a broad awareness campaign on prevention among African populations.

“In addition to medical response, part of the funds raised will be allocated for supporting the most fragile communities, in the least developed African countries, whose socio-economic activities have been impacted significantly by measures taken to mitigate the effects of the pandemic, “ the statement said. 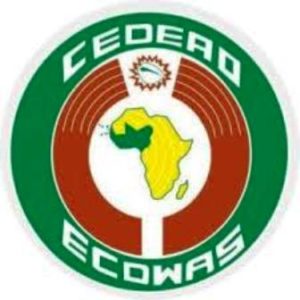 The West African Health Organisation (WAHO), the specialised health Institution of Economic Community of West African States (ECOWAS) has dispatched drugs, test kits and equipment to its 15 Member states to help  contain the spread of the pandemic and care for the sick.

“WAHO is also working, in close collaboration with the specialised services in Member States, to deploy personnel and epidemiological surveillance and data collection tools, strengthen the capacity of reference laboratories and train technical personnel,” the statement said.

Dr. Manaouda Malachie, Cameroon’s Minister of Public Health announced today that no fewer than 43 recoveries from COVID-19 have been recorded by the country. He however disclosed that Cameroon has also recorded 27 new cases of the dreaded disease.

“While we have 27 more positive cases today, I’m pleased to announce that we are also recording 43 cured cases, 11 in Laquintinie, 17 in HGY, 9 in Jamot and 6 in Central hospital. To this end, I congratulate the health personnel for their priofessionalism,” he tweeted.

Mhango who is also minister of health  disclosed that Malawi has eight confirmed cases out of which one person,  a 51 year old female who tested positive on Monday died today in Blantyre.

The Steering Committee for the Monitoring and Response Plan Against Coronavirus Pandemic in Gabon announced at a press conference that the country now has a total of 30 cases.

The committee said three of the cases were contactx of the country’s index case while two other cases were returnees from other countries. One of the cases was reported to have visited the home of one of the earlier infected cases.

Four of the cases are also reportedly being managed with hydroxychloroquine and azithromycin.

Chad Republic today announced the release of some categories of prisoners “to allow immediate application of government measures” towards the containment of COVID-19 pandemic.

A statement signed by Djimet Arabi, the country’s Minister of Justice,  said the sick, pregnant women minors and those who had completed at least three quarters of their terms could  be “exceptionally released at the behest of the Prosecutors General and Producers of the Republic as the case may be, and after verification made by the Inspector General”

Chad currently has nine confirmed cases of Corornavirus and one death.