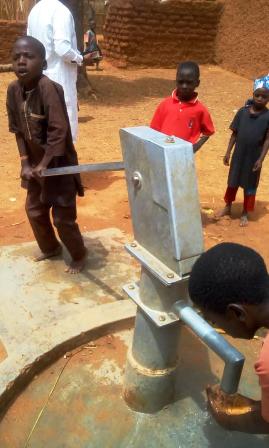 In far away Yammawah Kafawa, a fulani community in Dambata Local Government Area (LGA), of Kano State, at Northern Nigeria, there is no electricity for the children to watch Disney World or African Magic on television. There is no amusement park to visit for fun during holidays either.

But in place of these, something is now providing all the joy and fun for the children: a hand pump borehole situated within a walking distance from their mud houses, which is the community’s only source of clean water.

The borehole  is not only providing drinking water,  it  is giving the children an opportunity to meet up with friends, chat and play.

Fetching water from the borehole is indeed an exciting chore for 12-year-old hadizzah Saruman and her siblings.

“All my friends come to the borehole. So when we come to fetch water, we play. After playing, then,  we wash our hands and drink. We are happy because the water is so clean”, she said.
At any time of the day, children would be seen clustering round the borehole, waiting their turn to fetch, drink or to simply pump away.

“I love to go to the borehole. When I pull the hand pump, water comes out, and my brother fetches. When it’s my turn, he pulls, water comes out and I drink. It’s fun to do”, she said.

But it’s not  only the children that are benefitting from borehole.

Installed under the Sanitation, Hygiene and Water in Nigeria (SHAWN 11) project jointly funded by the UK government, UNICEF, government of Nigeria and the community, the borehole has brought a lot of positive changes to the community.

30 year old Iruna Saruna, told this correspondent, “since the provision of the borehole water, there has not been any issue of diarrhea, our children don’t fall sick constantly like before. Everything is always neat, including  our kitchen and clothes”.

It has also improved the girls’ menstrual hygiene, Saruna added,

“During our menstrual period, we take our bath with clean water, we wash the clothes and the rag we use as pad and keep them clean,” she confided in the reporter.

Unfortunately, Yammawar Kafawa, a fulani settlement, with about 3,000 people, has no secondary school, electricity or hospital.

Under the SHAWN 11 project, the community has been declared Open Defecation Free (ODF). The people now use  the pit toilet instead of defecating in the bush. They have also been introduced and taught to use the Tippy Buta (kettle and soap) for washing hands after going to toilet, all designed to aid hygiene practice around the toilet.

The toilet also has a drop hole cover, provided by the local government chairman, to further boost hygiene practice in the community.

Madam Saruna, a mother of 8 children, expressed appreciation to UNICEF for the introduction of the Tippy buta and the toilet.

She said: “Before, we use ash to wash our hands but now we use water and soap. We used to defecate in the bush, but now we use the pit toilet. I and my co-wife, have our separate toilets and we keep it clean. Before, the pit toilet was constructed with mud and gets wet and damaged  during the raining season, but now, it has been plastered”, she said.

The village head, Mallam Rabi’u Usman, also expressed happiness for the introduction of the toilet, tippy buta and the borehole. He said since the certification of the community as ODF, the leadership had set up a committee to ensure that people don’t defecate outside again.

“Any member of the community caught defecting outside will be made to pay a fine of between N2,000 and N3,000, to serve as deterrent to others,” he said.

The district head of Dambata, Dr. Muktar Adnan is  also championing the supervision. He told newsmen: “I understand the danger of open defecation. I am happy we have been certified ODF. I welcome any development for my people. The initial challenge was the buy in of other communities but now they’ve accepted the use of toilet. There’s also the issue of spending money to construct toilet. But so far, we are happy because  there has been reduction in diseases”.

According to a representative of Kano Rural Water Supply and Sanitation Agency (Kano RUWASSA), Hamisu Muhammed Usman, the number of open defecation in Kano state had reduced to 3%  (that is 420,000 persons) in 2018, however, access to improved toilet remains a challenge.

Usman, who spoke during a recent media dialogue on sanitation held in Kano state and sponsored by the UK government, UNICEF in collaboration with the Nigerian government, said: “So far, about 4 local governments have received WASH intervention through the EU-UNICEF WASH program. And 6 LGA’s under the DFID- UNICEF SHAWN program. However, the European Union is winding down this year”.

The FMWR report  showed that open defecation has an economic, social and health impact on national development. So far, Nigeria loses about 1.3% (N455 billion) of GDP annually due to poor sanitation and a third  of that cost is as a result of open defecation.

In November, 2018 the Nigerian government recently declared a state of emergency on Water Sanitatioin and Hygiene (WASH) Nigeria and launched an Open Defecation Free (ODF) campaign strategy to jump-start the country’s journey towards ending open defecation.

Explaining this during his speech at the media dialogue, Deputy Director, Head Child Rights Information Bureau, Federal Ministry of Information and Culture, Abuja, Olumide Osanyinpeju,  said the Federal Ministry of Water Resources, with support from UNICEF, in partnership with Inter-Ministerial Agencies, Civil Society Partners, the Private Sector, and the people of Nigeria, is currently leading the Open Defecation Free (ODF) campaign to end open defecation in the country by 2025, and achieve universal access to safely managed sanitation by 2030.

“Clean Nigeria: Use the Toilet” campaign is one of the most ambitious behaviour-change campaigns in Nigeria with a strong citizen/public engagement component. Leveraging on what is currently working in the States with Local Government Areas’ certified ODF; this campaign mode will create a national movement with elements of policy advocacy, public advocacy, grassroots mobilization, and private sector engagement,” Osanyinpeju enthused.