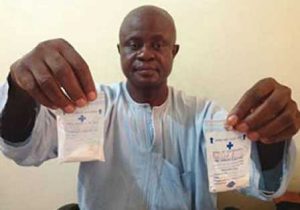 The National Agency for the Control of AIDS (NACA) and Nigeria Centre for Disease Control (nCDC) have urged Nigerians to ignore recent claim by Maduike Ezeibe a Professor of Veterinary Medicine and Clinical Virology at the Michael Okpara University of Agriculture that he had discovered a drug for the cure of HIV/AIDS.

In a joint statement yesterday, the two agencies declared   that “there is really no basis for a claim to cure of AIDS” in the study reportedly conducted by the Nigerian scientist.

Prof. Ezeibe, backed by the Michael Okpara University of Agriculture, where he works, had announced last week that he had developed a new drug for the cure of HIV/AIDS with Synthetic Aluminium-Magnesium Silicate.

According to him, his breakthrough was presented to the World Virology Conference in Atlanta in 2015, and Antonio (Texas) in 2016. He informed that the drug was found effective when tested on 10 volunteers who were made to apply through their doctors to the Vice Chancellor of the University. The volunteers, he further said, were subjected to monthly tests for viral loads and CD4-lymphocyte counts.

But NACA and nCDC faulted the procedure adopted in the study and concluded that  Ezeibe’s  claims could stop patients with HIV from taking life-saving antiretrovirals and give them false hope of a cure.

“This study was published in two little known, fee-charging ‘predatory’ journals and involved less than ten patients. In the “clinical trial” as reported, there was no evidence of the use of controls, which is the basis of all efficacy trials.

“Without controls, you can neither have randomisation nor blinding, two other critical factors in studying the effects of new medicines.  Critically the primary outcome measured in this study was based on plasma viral load levels that are known to fluctuate in patients, even in the absence of any intervention. It is also worth noting that virological suppression (viral load less than 50 copies/ml) was not achieved in 6 of 8 patients.

“There appeared to be no medical doctor involved in the execution of this study and there was no evidence on where or how the patients were treated or monitored during this study, their clinical and treatment status at the beginning or at the end of it,” the statement signed by  the NACA DG, Dr Sani Aliyu and the CEO of nCDC, Dr. Chikwe Ihekweazu stressed.

They  called on patients living with HIV who are currently taking their medications to continue to do so and to see their doctors if they have any concern.

“We call on editors of media houses in Nigeria to seek comments from the leadership of the relevant government parastatals and professional bodies when it receives new research findings related to our areas of responsibility. We assure you that we will respond rapidly and constructively to any queries,” the agencies further said.