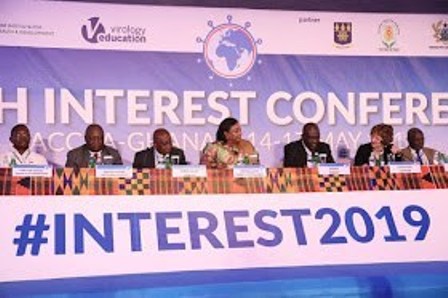 ACCRA, Ghana – The 13th International Conference  on HIV Treatment, Pathogenesis and Prevention Research in, Resource-Limited Settings (INTEREST), kicked off  in Accra, Ghana Monday amid call by the Ghanaian First Lady, Mrs Rebecca Akufo-Ado on all countries to accelerate response to the disease if it is to be eliminated by 2030.

Speaking at the opening  of the conference Mrs. Akufo-Addo said all that would require to achieve the elimination goal is for countries to deliver with commitment  the “well-known” interventions that have demonstrated favourable outcomes.

The INTEREST Conference, the premier scientific conference on HIV in Africa, organised by the Amsterdam Institute for Global Health and Development and Virology Education, providers of healthcare professional education holds from May 14 to 17, 2019.

The conference aims at providing a wider knowledge base in the fields of treatment, pathogens, and prevention of HIV-1 and related infections and chronic conditions. Also. It is expected to serve as a forum to share ideas on how to provide needed  support towards HIV testing services and the provision of clinical care to adults, adolescents and children living with HIV across Africa, in order to achieve the 90-90-90 HIV goals.

According to Mrs Akufo-Ado, making available antiretroviral drugs to all HIV positive pregnant women, remains a contributory factor to the elimination of mother-to-child transmission. However, she added, women must be supported  to adhere to their medicines in order to prevent transmission to their babies.

“Every child born to an HIV positive mother should also be screened for HIV within the first six weeks of life and followed up according to national protocol. Any child who tests positive at any time, during the follow-up, should be initiated on antiretroviral therapy as soon as possible,” she said.

The First Lady further assured  the conference  that Ghana would be able to provide access to  critical services next year for 90 per cent of children living with HIV in the country.

She said this would be made possible with the successful implementation of the National Acceleration Plan for Paediatric HIV Services, which is a five-year (2015-2020) strategic plan aimed at putting 90 per cent of estimated number of children and adolescents (0-19) living with HIV in Ghana on treatment by 2020.

According to her, Ghana, under the implementation activities, has held outreaches to advocate accelerated elimination of mother-to-child transmission and treatment of children living with HIV.

She said the implementation of the health outreaches in Ghana was successful enough to be used as a case study by ABOTT to get other countries to conduct similar outreaches.

She, however, stated that whilst there had been remarkable progress against HIV and HIV-related deaths, it seems children have been left behind, as figures in 2017 estimated that 180,000 new infections among children occurred globally.

She thus charged the Ghana Health Service, saying “every child born to an HIV positive mother should also be screened for HIV within the first six weeks of life and followed up according to national protocol. Any child who tests positive at any time during the follow-up should be initiated on antiretroviral therapy as soon as possible”.

“The Ghana Health Service should also have a reporting system that identifies every single infant who is infected with HIV,” she added.

In a welcome address, Ghana’s  Minister of Health, Mr Kwaku Agyeman-Manu, said HIV was still a major disease across the world after 30 years of existence,

Mr Agyeman-Manu said abstinence remains the key to help stop the disease and called on all to abstain from casual or unprotected sex.

A life spent in the AIDS response