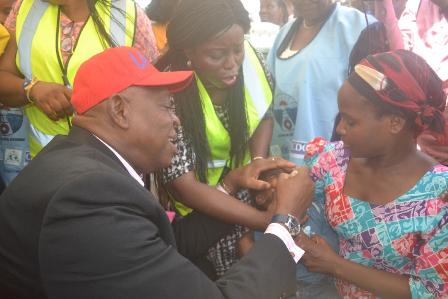 The Lagos State Government will on Friday, 27th April 2018 commence the implementation of 4-day campaign against Poliomyelitis (National Immunization Plus Days) in all Primary Health Care Centres, Secondary Health Facilities and other designated Centres in the 20 Local Governments and 37 Local Council Development Areas across the State.

Special Adviser on Primary Healthcare, Dr. Olufemi Onanuga who represented the Lagos State Governor at the flag-off ceremony of the April 2018 National Immunization Plus Days (NIPDs) held today at Lagos Mainland Local Government Area Secretariat disclosed that all children under 5 years will be vaccinated against the disease with 2 drops of Oral Polio Vaccine irrespective of their immunization status starting from 8.00am-1.00pm daily.

He explained that Poliomyelitis is one of the major vaccine-preventable killer diseases of children under the age of five, emphasizing that it is a highly contagious faeco-oral disease that can be easily transmitted through poor personal and environmental hygiene. He further stated that an infected child can develop symptoms such as fever, tiredness, headache, nausea, stiffness in the neck, and pain in the limbs. In some cases, according to him, it could lead to paralysis which most of the time is irreversible or in fatal cases results in death.

He disclosed that Lagos State like other States of the Federation participates in all catch-up immunization campaigns towards increasing immunization coverage in Nigeria. He noted that tremendous progress has been recorded in the fight to eradicate polio in Nigeria, especially since 2009.

“As a state, we have taken the lead in eradicating this deadly disease since April 2009 making it a 9-year success story”.

“The reasons for this feat are not far-fetched. In this State, polio eradication has remained on the front burner of all relevant stakeholders including governments at all levels, traditional leaders, religious leaders, community leaders, partners and international agencies such as WHO, Rotary International and UNICEF”, Onanuga stated.

Highlighting the objectives of the campaign initiated under the Polio Eradication Initiative (PEI) in Nigeria, the Special Adviser mentioned that the program is aimed at reducing the number of unimmunized children in the state as well as improving the herd immunity of the environment against the Wild Polio Virus.

The Special Adviser recalled that Nigeria was delisted from the Polio endemic countries in September 2015 but according to him, the unfortunate discovery of three cases of WPV in Borno State in August 2016, coupled with the influx of migrants to Lagos State on a daily basis necessitates the participation of the State in the various special immunization campaigns adding that this will go a long way in contributing in no small measures to the success story recorded in the state.

He stated that the NIPDs strategy employs the combined usage of the fixed posts, house-to-house and transit teams for the delivery of polio antigens stressing that the fixed posts, that is government health facilities will, in addition, deliver other scheduled antigens such as BCG, BOPV, pentavalent, Measles, Yellow Fever and HBV.

Onanuga then urged the entire communities in the state, the traditional and religious leaders and leaders of market men and women associations to ensure that all mothers and caregivers fully immunize their children before their first birthday and thereafter receive supplemental immunization doses during campaigns such as this to improve the herd immunity.

“I encourage all stakeholders including parents, political and religious leaders, civil society organizations and mass media to play a role in ensuring that children under five years are immunized free of charge to reduce the risk of death and disability from this vaccine-preventable disease.

Immunization remains the most cost-effective and efficient child survival strategy for children who are the future of the nation and this informed our unrelenting efforts in protecting our children from the vaccine-preventable killer diseases. It is free and safe,” he remarked.

He also encouraged parents and caregivers of the eligible children to visit the fixed immunization posts during this period for other antigens.

He added that measures have also been put in place to record an improvement over the last program as according to him; all vaccinators throughout the State have been adequately prepared for the exercise.

Speaking in the same vein, the Chairman, Lagos Mainland Local Government, Mrs. Omolola Essien stated that her administration is committed to achieving full immunization for all children stressing that the ultimate goal is to ensure that every child in the State, rich or poor, whether living on the Mainland or other part of the State has equal access to the best immunization.

She added that universal access to safe vaccines is one of the many strategies for preventing and controlling diseases and promoting good health among children.

No one should die as a result of Malaria – Health Minister