Nigeria joined the rest of the world to commemorate the World Blood Donor Day on June 14 amidst revelation by the Minister of Health, Prof.  Isaac Adewole that 60% of the nation’s blood need is obtained through commercial donors.

At a briefing in Abuja, the minister disclosed that the country requires no fewer than 1.8 million units of blood annually, saying voluntary non-remunerated blood donated in the nation is only 10 percent of available units. According to him,  the amount donated by relations of persons seeking care in health facilities is just 30 percent of available blood units.

The theme for the commemoration is “Blood donation as an action of solidarity,” while the slogan is: “Be there for someone else. Give blood. Share life.”

He said transfusion of blood and blood products “has been of tremendous help in saving millions of lives. In-fact it supports complex medical and surgical procedures. In addition to this it plays essential, life-saving roles in maternal and child care as well as during the emergency response to man-made or natural disasters. Nevertheless, we must not overlook the challenge of transmission of serious infections, including HIV and hepatitis, through unsafe blood and chronic blood shortages which has attracted global attention.

“Let me add that a number of patients requiring blood transfusion still do not have timely access to safe blood. Consequently we can only ensure adequate supplies of blood through regular donations by voluntary, unpaid blood donors who are usually motivated by self-sacrifice, a sense of moral duty or social responsibility. To be candid, they represent the safest group of donors and the prevalence of blood-borne infections is lowest among them.”

Meanwhile, the minister said in order to address current gap as well as strengthen the capacity of the National Blood Transmission Service, government was in the process of concluding the regularization of appointments of core technical staff that were previously engaged on the programme while it was funded by the donor.He said the effort would ensure that relevant skill sets are available to optimize service delivery.

“I will also like to announce that an Executive bill for the establishment of a National Blood Service Commission was recently approved by the Federal Executive Council. This bill when enacted into law will serve to consolidate on the gains made in the last 13 years and take the National Blood Service from its current status to the next level, in line with international best practices. 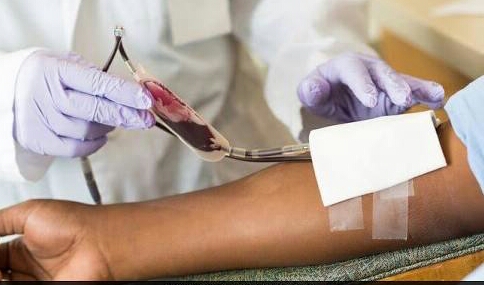 “May I add that  NBTS is currently building community partnerships through the engagement of Community Based Organizations, and the organized private sector, to deepen awareness, grow a steady stream of regular blood donors, as well as make blood donation an integral part of their Social Responsibility programmes,” he stated.

Speaking on health benefits of voluntary blood donation, the minister said studies had shown that people who voluntarily donate blood have the likelihood of living longer.

“Secondly, researchers have also found out that majority of the people who are regular blood donors rarely suffer from anaemia of the aged.  Thirdly, the donor has the opportunity to undertake free health screening and a mini blood test before every donation at the NBTS centre. Fourthly, repeated blood donations enhance the production of new blood cells, improve the overall cardiovascular health and can lower the risk of severe cardiovascular events such as stroke by 33 per cent. And so I encourage all healthy Nigerians to take advantage and enjoy the invaluable benefits.”

He also announced that government would soon honour a Nigerian, Nathaniel John, who has donated blood 55 times.

In his remark, Dr Hamzat Omotayo, who spoke on behalf of the Director-General of the World Health Organization, Dr Tedros Adhanom Gebreyesus, and Regional Director of the organization, Dr Matshidiso Moeti, said safe blood donations play critical role in providing effective and prompt care for patients in need. According to him, ordinary people can be there for someone else, simply by giving blood and sharing life.

“In Nigeria, although well-meaning individuals and organizations have made genuine efforts to increase the availability and safety of blood, the demand for blood transfusions is still on the rise,” he noted.