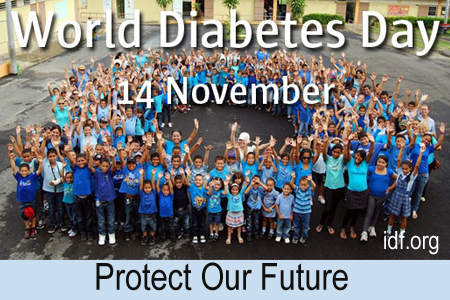 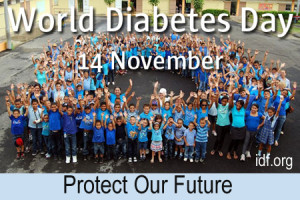 Today is World Diabetes Day. Amidst statistics showing that the condition is increasing at a fast pace globally, various groups across the world embarked on different activities aimed at drawing attention to the disease and its deadly impact on human health.

In Nigeria, Mr Obi Madubogwu a Nollywood Veteran and Saving Life for Africa Diabetics Foundation (SLAD) founder, in conjunction with  the Actors Guild of Nigeria (AGN),  led Nigerian actors and members of the public in a walk across the streets of Lagos to mark the day. The group distributed education leaflets during the walk and also carried out free diabetes screening.

The News Agency of Nigeria (NAN) reports that over 200 people were screened at Orile and Ojuelegba during the walk.

Madubogwu described diabetes as a condition caused by high blood sugar that could have very serious side effects if it is not properly managed.

The actor said that diabetic symptoms which included weight loss, increased hunger, increased thirst and increased urination were easily ignored, a reason so many people with the condition are not aware they have it.

“Today is World Diabetics Day and we are creating awareness about diabetes management, early detection and how people can know their status.

“We have noticed a high sugar level in a majority of the people that we have tested so far, some even up to 400 mg/dL and they did not know it,” he said.

Madubogwu said that in a healthy person, the sugar level should be between 82 to 110 mg/dL and that the higher it was the more serious the health risk.

“Presently, there is no cure for diabetes but it can be managed, it is not a death sentence if recognised on time,” she said.

Charles-osuagwu said that was caused by the inability of an individual’s body to make use of the sugar in their system because of a particular enzyme called insulin.

“Insulin converts blood sugar to glucose, for metabolism and other body activities.

“Diabetes occurs when the body does not produce enough insulin or when the cells of the body do not respond properly to the insulin,” she said.

She further disclosed that because the body cannot make use of the sugar, it just keeps circulating in the blood making the person tired and unable to carry out normal tasks.

She said that diabetes also affect other organs of the body, including the kidneys and eyes. Not only that, she added that the condition hinders blood supply to parts of the body that are far from the heart and as a result leg injuries in diabetics take longer time to heal.

“Such a person can come down with diabetic foot gangrene which can result in amputation, a life treating infection called septicemia and death,” she said.

She said that people could reduce their risk of developing diabetes if they watched their diet and exercised frequently.

The theme for the 2015 World Diabetes Day is “Healthy Living and Diabetes”.