• Sets up National Emergency Centre
• ‘We’ll hold him accountable for the initiatives,’ says CHR Board Chairman

The National Primary Health Care Development Agency (NPHCDA) has declared a state of emergency on routine immunization in an effort to increase immunization coverage for Nigerian childrren.
NPHCDA Executive Director, Dr Faisal Shuaib made the announcement at an Inaugural Quarterly Media Interactive Forum, tagged #OpenNPHCDA, in Abuja on Thursday while revealing his four-point agenda for the agency.
The agenda which include accountability, assessment and exploration of staff’s strength for improved performances, renewed zeal on routine immunization and revitalization of primary health care services across the country are to be achieved in two years.
Shuaib, who was appointed as head of the agency by President Muhammadu Buhari five months ago, said he inherited a number of ills including financial mismanagement and poor vaccination of children in parts of the country.
He described the state of routine immunization in the country as a serious issue and an emergency saying the agency would establish a National Emergency Centre specifically to focus on it.
“We want to see a Nigeria where it doesn’t matter where you live, you can have the same access to primary health care, whether you are in Abuja or you are in my village…In the last few months, what we have done is to try and improve on what has been happening at NPHCDA.
“I am here to believe that nobody is a stranger to the fact that we had challenges in the recent past. We had challenges around accountability in the primary health care services. We had challenges around how we could do a better job around primary health care.
So, as a team, because this comes down to everybody at NPHCDA, we’ve taken a few steps back to say what are the priorities for us at NPHCDA? How can we rapidly achieve our mandates? How can we assuage the yearnings of our people?
“Mr President made it clear that one of his priorities is to close the gap between the haves and the have not when it comes to primary health care. The honourable Minister has been driving the policy direction that focuses on primary health care, making primary health care facilities more functional, where people live and work.
“What we have done is deconstruct all of those visions and say first of all, we must prioritize. And, we have prioritized four that we must achieve at NPHCDA within the next two years.”
He said the first thing done by the agency was to engage a firm to help assess the level of productivity and area of strengths of the agency’s staff. According to him, senior officials of the agency were moved to different parts of the country to help drive the vision of the institution.
He also said the agency had engaged KPMG, a firm, to look at the financial management processes, to “ensure that all loopholes are closed when it comes to the management of finances. They are going to automate our systems that wherever we are, on the click of a button, we will be able to say clearly how budgetary allocations are being expended.
“Secondly, we came very close to eradicating polio until we had an outbreak last year. After the outbreak, we rapidly mounted and effective outbreak response in Borno. We went two years and counting without a single case of wild polio virus. One more year, Nigeria would have been declared free of polio, but, because we had pockets of places that were under the control of insurgents, we were not able to access those LGAs and provide the vaccines needed to prevent polio.”
He said it had been almost a year since the country mounted the response and that no case of polio had since been recorded in the country. He pledged that the momentum would be sustained.
The third agenda of his leadership is routine immunization, he said. He noted that what data showed the agency was that routine immunization was not as good as it should be. He said less than half the population of eligible children got the vaccines that they needed to get.
“That is just the truth of the matter. There is no way we can colour it. It is a challenge that we face as a people,” he said. 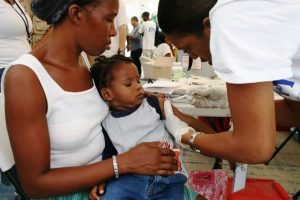 He vowed that specific steps would be taken to deal with the situation. He added that routine immunization in the country has been declared an emergency. “If less than half of our kids are getting the vaccines that they need, then, it is a serious issue, because we could have a full-blown epidemic like we’ve already seen.
“We’ve seen outbreak of measles in some areas. We’ve had outbreak of meningitis. In response to this emergency we’ve declared, we are also setting up a National Emergency Centre to focus on routine immunization. This will involve getting all the experts and government staff sitting down in one place, looking at the data, analyzing the data and finding out what the challenges are.”
Revitalizing primary health care system is the fourth agenda set out by the agency’s leadership. He said the country could not achieve quality health systems without having functional health centres.
Meanwhile, implementation of the agenda would be monitored by civil society organizations in the country, said Dr Aminu Magashi, Chairman, Board of Trustees of Community Health and Research Initiative (CHR) and one of the two representatives of civil society groups at the Global Financing Facility (GFF) Investors’ Group.
He said: “We are unlocking the agency, make the agency more open to the people of Nigeria where the services of those people are the reason the agency is set up. They were impressed by the level of attendance by the NGos and the media.
“So far so good, from what he said, he has four agenda for which he will be held accountable. He wants to improve governance, partnership and accountability in the agency; he wants to revitalize the primary health care by introducing a new cadre of community. He called them community health influencers, promoters and service providers. He also wants to establish a new National Emergency Operation Centre for Immunization. We are going to hold him accountable for these initiatives.
“And, now that he has conveyed the agenda, we are going to follow up. We are going to develop scorecard to track the progress of what he is doing and the agency.”