The Nigerian government on Thursday revealed it was ‘anxiously’ waiting for the result of pilot RTSS/ASO1, the world’s first antimalarial vaccine, recently introduced in Malawi.

Success of the vaccine, the government said, would catalyze global efforts at eliminating malaria.

Minister of Health, Prof. Isaac Adewole, while addressing journalists at an event to commemorate 2019 World Malaria Day in Abuja said Nigeria was responsible for 25% of global malaria burden, and 19% of global deaths from malaria.

While waiting for the success of the trial vaccine, the minister said more commitments were being made by the country with the help of its development partners to eliminate the scourge.

“We are fully committed to malaria elimination. We have developed innovative programmes that will increase access to funds for malaria programme implementation, some of which include the Basic Health Care Provision Fund, the Save One Million Lives Project, and we are also soliciting for additional funding support for malaria programme,” he said.

The theme of the commemoration is “Zero Malaria Starts with Me”, and slogan is “Join Me”.  Adewole noted that the theme was apt and reflected government’s commitment to the achievement of a malaria free Nigeria.

The slogan, according to him, revealed government’s desire to have all people in the country to come on board in the fight against the disease.

He urged that everyone in the country has a role to play in the efforts to defeat the disease. He listed the roles of individuals to include keep their environment clean; sleeping inside long lasting insecticidal nets; go for test when  feeling feverish; and if positive ensure they are treated with  artemisinin based combination therapy (ACT)

“Malaria is still a public health challenge. According to the World Malaria Report, Nigeria still accounts for 25% of the global malaria burden. We also account for 19% of deaths from malaria. Though funding for malaria control has remained relatively stable since 2010, we need to improve on the level of our investment  to achieve a reduction of at least 40% in malaria case incidence and mortality rates globally by 2020. The WMD celebration therefore provides us the opportunity to review our strategies and up the tempo with a view to reducing significantly the burden of malaria in our beloved country.

“Let me inform you that we are fully committed to malaria elimination. We have developed innovative programmes that will increase access to funds for malaria programme implementation. Some of which include the Basic Health Care Provision Fund, the Save One Million Lives Project and we are also soliciting for additional funding support for malaria programme.  Let me now intimate you with the progress and milestones that we have recorded so far. 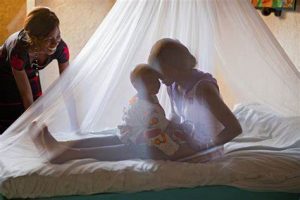 malaria burden. The 2013 NDHS showed that malaria was responsible for two out of 10 deaths in children less than five years, as against 30% in previous years. The NMIS 2015 showed a remarkable reduction in the malaria prevalence from 42% (NMIS 2010) to 27% which resulted from a strong commitment from government and partners in their efforts to stem malaria. We look forward to the results of the NDHS 2018 for data on the current status of malaria,” he stated.

He went on: “In 2018, President Mohammadu Buhari approved an incentive funding of $18.5 million for procurement of Long Lasting Insectcide Treated Nets(LLIN). We carried carried out LLINs replacement campaigns in eight States (Ogun, Jigawa, Katsina, Gombe, Nasarawa, Kebbi, Akwa-Ibom, Bauchi) with support from our partners – GF, PMI/USAID, CRS and SFH.  In four of the Global Fund supported States, Information, Communication, Technology for Development (ICT4D) was deployed for the LLINs replacement campaign implementation. In all, a total of Twenty-four Million, Seven Hundred and Thirty Thousand, Eight Hundred and Ninety-six (24,730,896) LLINs were distributed across the eight States.

“Similarly, 7,200 LLINs were also distributed in Internally Displaced Persons (IDPs) camps in Adamawa State. As you all know, the campaigns are done every 3 years in each state of the Federation based on the life span of the nets. This is to ensure that our people are continuously protected from the scourge of malaria.

“In order to ensure effective monitoring of the malaria vector, we have gone further to establish three (3) new sentinel sites for vector surveillance in Osun, Niger and Kano States. This has increased the number of vector sentinel sites in the country to fourteen (14). Currently, a drug efficacy therapeutic test is on-going to assess the efficacy of recommended antimalarial drugs (ACTs, AA, DHP and Pyramax) in additional four sites.”