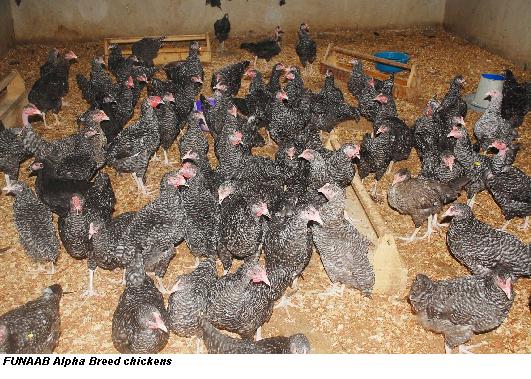 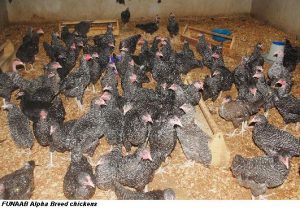 A Professor of Animal breeding and Genetics in the College of Animal Science and Livestock Production (COLANIM), Federal University of Agriculture, Abeokuta (FUNAAB), Ogun state, Prof. Olufunmilayo Adebambo and her poultry-breeding team, have developed a new breed of chicken in the university, called FUNAAB-Alpha, after over 20 years of continuous research.
According to the don, she started the project in 1994, with the first generation of chickens, collected randomly all over South West, Nigeria.
Recalling her experience, Prof. Adebambo noted that the different types of local chickens (Normal Fethered, Frizzle Feathered and Naked Necks), were collected all over Nigeria by students in the Department of Animal Breeding and Genetics (COLANIM) and were screened for conservation and multiplication by her first Ph.D student, late Dr. (Mrs.) Josephine Adenowo, during which, eggs were taken to Oyo town, Oyo State, for hatching.
Explaining further, she stated that she started the second generation of the birds after screening and selection from 1,000 birds, only 27 got into the cage.
This, she said, was done to screen against diseases and upon getting into the cage, the birds were further screened against brooding, because as local chickens, they had the tendency to brood after egg laying, which is usually in clutches, after which the chicks are reared.
These activities, therefore, render them unproductive like imported birds. Since motherhood is not allowed for commercial poultry business, only 17 non-broody birds formed the foundation stock in the cage.
“From these 17, we started multiplication, cross-breeding, back-crossing and cris-crossing, which brought us to where we are today. We presently have a Gene Pool of seven lines from which the Alpha lines were generated.
“The birds are presently on test across the country, by rural farmers, as we are in the process of registering the breeds as FUNAAB-Alpha, the first indigenous chicken for Nigeria and which was developed by Nigerian scientists from the local scavenging chickens, viz: FUNAAB-Alpha indigenous birds (FIn-Alpha Birds).”
The Professor of Animal Breeding and Genetics noted that to develop the meat line, two of her postgraduate students had to work critically on the genomics aspect, which could aid selection, using the blood group and genetic polymorphisms, to select for higher body weight in the birds.
Professor Adebambo noted that results generated from the research indicated that FUNAAB Alpha was almost at par with the imported Sasso and Kuroiler and much better than the Fulani and the Shika brown, according to the result generated by ACGG.
She called on the University Management to partner with the research team on the PEARL project, for continuity and sustainability.
“If the university becomes one of the major shareholders, as the project is sited on FUNAAB ground, it would be a great thing, as this would then enable us to expand,” she stated.