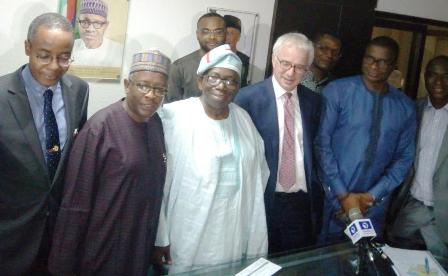 ABUJA – But for the Global Fund and the US President Emergency Plan for AIDS Relief (PEPFAR), no fewer than 1.5 million Nigerians would have died from HIV/AIDS.

This was disclosed by the Director-General, National Agency for the Control of AID (NACA) Dr Sani Aliyu, on Tuesday at a meeting of Director-General, Global Fund, Peter Sands, with the Minister of Health, Prof. Isaac Adewole.

Nigeria has lost thousands to the scourge in the past three decades, with only 1.1 million out of about 3.4 million living with the disease in the country on treatment.

“For HIV, If we didn’t have the Global Fund and the PEPFAR programe, we would have had 1.5 million Nigerians dead by now, and we would have had five million more new infections than what we currently have,” he said.

“As a government, we remain committed to the Global Fund to ensure that we are able to deliver these programmes in a very just, equitable and transparent manner. We are also aware of the need to have sustainable arrangement in the long term, because as they say, you cannot continue to expect gift all the time for ever. And, the government is committed to taking its rightful place in investing in the future for the health of our people. And, we have been working very closely with the Global Fund to see how we can transition this arrangement, particularly for HIV, and also for TB and malaria in the long run.”

He noted that with the new funding cycle, more HIV patients will be placed on treatment in the country.

In his remarks, the new Executive Director, Global Fund, Mr. Peter Sand said: “I was very keen in taking this role to come to Nigeria because Nigeria is the country in which the Global Fund invests most money in the fight against HIV, TB and malaria. This is for the fact that Nigeria is the country that has the largest malaria burden in the world. It has the second largest number of people with HIV, and it is seventh in the list of people affected by TB. So, if we are going to end the epidemic of HIV, TB and malaria in the world, it has to happen in Nigeria.

“As the DG said, we have invested significant amount of money. We’ve spent $2.6 billion. And, in the current funding cycle, which is three-year cycle, we are investing $660 million. In doing this investment, we are doing so very much in partnership with Federal Ministry of Health, NACA and other agencies…

“There have been significant interventions as the DG said. Significant number of people have been put on treatment for HIV and TB. There has been very wide coverage of bed nets and conventional malaria treatments. But, it’s worth saying that together, we still have a lot to do, if we want to stop the deaths in this country from AIDS, TB and malaria, and if we want to stop the epidemic. .

“On HIV, we need to get treatment; we need to move people who are living with HIV. We need to curb infection rate, and we need to move the progress that has been made in preventing mother-to-child transmission. On malaria, we need to step up the scale of coverage on vector control, by which I mean bed nets, spraying and action against mosquitoes. And, we need to make further improvement on case management so that we do malaria diagnosis quickly.

“On TB, the big task is to raise the percentage of people who fall ill with TB, get diagnosed and treated. That need to be raised very significantly. The Minister and the President showed their commitment to do at the UN high-level meeting on TB in September. I am confident that with this partnership, we can together make progress, and we can bring to an end these three diseases that have caused so much suffering here in Nigeria and elsewhere in the world.”

Minister of Health, Prof. Isaac Adewole said Global Fund had been a major player in the fight against HIV/AIDS, TB and malaria.

He explained that the administration of President Muhammadu Buhari almost ran into troubled water at its inception because of rots and mismanagement of fund and other resources made available by Global Fund and other donors for the treatment of the diseases.

He said those challenges had been addressed by the administration and pledged that grants had since been judiciously used.

Besides, the minister noted that HIV treatment in the country is among the best, worldwide.

He concluded that N55 billion from the Basic Healthcare Provision Fund would be retained, with additional N22 billion for vaccines in 2019, while government would keep ensuring that there is sustained increased of local funding for health.

Africa records no wild polio virus since 2017 – WHO