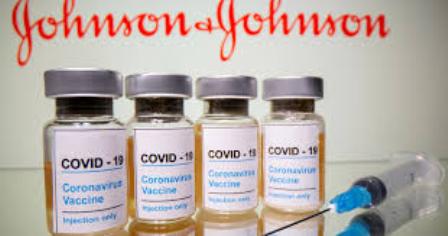 JOHANNESBURG (AP) — South Africa Health Minister Zweli Mkhize said the country  would switch to the Johnson & Johnson vaccine and, at least for now, not use Oxford-AstraZeneca’s — which has been heralded as one of the most promising for the developing world because it’s cheaper and does not require freezer storage like some other leading vaccines.

The world is watching South Africa’s vaccination strategy intently since there are increasing concerns that new variants — not just the one first detected here — might evade vaccines, making it harder to bring an eventual end to the pandemic. The variant now dominant in South Africa is more contagious, experts say, and it recently drove a devastating resurgence of cases.

A small study that suggested the AstraZeneca vaccine was poor at preventing mild to moderate disease caused by that variant threw the country’s vaccination campaign into disarray this week just as it was about to start. Experts say the vaccine — the only one authorized for general use in South Africa — may still prevent severe disease.

But officials quickly turned their focus to the one-shot J&J vaccine — which has only been approved for use in studies in South Africa and, in fact, hasn’t yet been authorized for general use in any country. The company has applied for emergency use permission from the U.S. Food and Drug Administration and South Africa’s regulatory authority.

Mkhize, in a nationally broadcast address, assured the public that the J&J vaccine is safe, pointing to the fact that it has been tested in 44,000 people so far. It will now be used to launch a drive to inoculate the country’s 1.25 million health workers, he said.

A clinical study of the vaccine in South Africa, part of international trials, showed it was 57% effective at preventing moderate to severe COVID-19 in a test conducted when the variant was dominant. It provides even better protection against severe disease, with 85% efficacy after 28 days.

But one nurse at a Soweto hospital said the switch made him and some of his colleagues feel like they were being used “as guinea pigs.”

“I think what happened with the AstraZeneca vaccine has affected the trust that we had in the government to do a proper vaccination program,” said Sipho Dinabantu, who works at Chris Hani Baragwanath Hospital. “We were given assurances that it was ready to go but now it has been put on hold. It makes me wonder a lot about the Johnson & Johnson vaccine, which is yet to be approved.”

“It was the right decision to move to a vaccine that’s been shown in South Africa to protect against the new variant that is circulating here,” said Hanekom, director of the Africa Health Research Institute. “The entire situation is unprecedented. We’ve never been in such a situation. Every day things change, and we need to adapt to these changes.”

South Africa will begin administering the first shots next week, said Mkhize. The first doses will come from vaccine sent to the country for testing purposes, and more are expected in March, when a South African pharmaceutical company begins bottling the vaccine here, he told a parliamentary committee Wednesday.

In all, the country hopes to vaccinate an estimated 40 million people by the end of the year — or about two-thirds of its population. South Africa also plans to use the Pfizer vaccine — though it’s not yet authorized — and is considering others, including Russia’s Sputnik V, China’s Sinopharm and the Moderna one, Mkhize said. Unlike the J&J shot, none of those vaccines has been clinically tested against the variant prevalent in South Africa, although Pfizer has tested blood samples of people exposed to the variant.

The change of course came just one week after South Africa received its first vaccines — 1 million AstraZeneca doses, produced by the Serum Institute of India. But after results of the preliminary study, which has not been peer reviewed, were announced Sunday, South African officials quickly halted the planned rollout.

Mkhize said scientists were still discussing what to do with the AstraZeneca doses, and one possibility was that they would be swapped for another kind; an expert also suggested they could be used in a study. An added complication, though, is that the shots have an April 30 expiration date.

South Africa’s abrupt move may reduce enthusiasm for the vaccine, which had offered hope to many poorer countries, since it is being produced in large quantities in India and the international COVAX facility has purchased it in large numbers for distribution around the world.

But Dr. Soumya Swaminathan, the World Health Organization’s chief scientist, said people shouldn’t conclude from South Africa’s decision that the AstraZeneca vaccine doesn’t work. She said all of the available evidence to date shows the vaccines developed so far reduce deaths, hospitalizations and severe disease. In fact, on Wednesday, independent experts advising the WHO recommended the vaccine’s use, even in countries with variants.

South Africa by far has the largest number of COVID-19 cases on the African continent with nearly 1.5 million confirmed, including almost 47,000 deaths. After a resurgence that spiked in early January, cases and deaths are now declining, but medical experts are already warning that South Africa should prepare for another upsurge in May or June, the start of the Southern Hemisphere’s winter.

Breast cancer now most common form of cancer – WHO