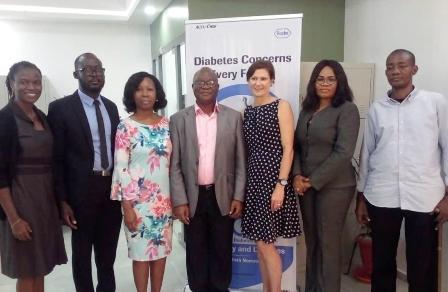 • NHO, in collaboration with Roche, holds 2018 WDD Media Round table

Mr. Tunde Famoye, a young man living with diabetes for the past five years must count himself lucky for staying without medications for four months, an option that lack of finance pushed him into.

He told journalists at the 2018 World Diabetes Day Media Round Table organized by Nigeria Health Online, (NHO), in Conjunction with Roche Products Limited on Wednesday November 7 in Lagos, that he took the expensive risk because he could not afford his drugs.

His active life had been deflected as a result of above the knee amputation also caused by diabetes. To worsen the situation, Mr. Famoye said his wife could not assist because she lost her job.

Sharing how difficult it is to manage diabetes Famoye said life was miserable for him in those four months of none medications. Fortunately, he came back to life when an Endocrinologist, Dr Afoke Isiavwe, came to his rescue, after he explained his condition at a programme organized by the doctor early in 2018.

In his words: “Dr Afoke Isiavwe organized a program earlier this year and I told them that for about four months, I hadn’t taken drugs. It was not that I didn’t want to take it but there were no resources to get them and there was no assistance from anywhere. But she has shown me love and I have gotten back my drugs,” he said.

Speaking further, Famoye said: “I met someone while in the hospital, he was also diabetic and we left the hospital at about the same time. We kept communicating, later we didn’t speak after about one year. So, I called him and his wife picked the call, and she said the man was late. When I asked what happened she said they were unable to buy his drugs.

Famoye, however is pleading with the government to come to the aid of persons living with the condition.

“I believe there is a lot the government can do to help people in this condition, such as social welfare packages especially when it comes to health issues like this. There is so much to this disease because at the end of the day, I had to start treating High Blood Pressure too. Government must assist us,” Famoye lamented. 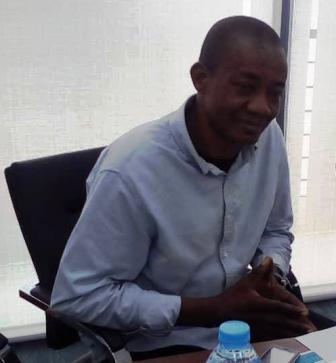 TUNDE FAMOYE: “Life is tough for Nigerians living with diabetes”

Famoye is not alone. Mrs. Rebecca Umeh, 51, told NHO she can no longer foot her hospital bills and has therefore left the care of her condition in the hands of quack pharmacists.

Also, NHO publisher, Sam Eferaro who has been managing diabetes for some years, told the Round Table participants that managing the condition could be tough and challenging though this becomes easier with knowledge of various control measures for the disease.

“What I find, as somebody living with diabetes, is that some of these products are expensive and you may have to take them for life. The only way out, I think, is for the government to step in to make sure these medications are affordable for people living with diabetes. The way to make it affordable is to remove import duties and generally regulate it. It shouldn’t be all comers affair.

Diabetes has continued to be a source of concern to many people around the world and Nigeria is not exempted.

In her lecture at a the forum, the Chief Medical Director of Rainbow Specialist Medical Centre, Dr Afoke Isiavwe said diabetes occurs when there are raised levels of glucose in the blood because the body cannot produce any or enough insulin or use insulin effectively. She describes it as a global emergency noting that four out of five people with diabetes live in low and middle income countries.

While referring to a publication: “Meta-Analysis Nigerian Diabetes Prevalence”, she noted that the pooled prevalence of diabetes mellitus was 5.77%.

She said diabetes which has Type 1, 2, gestational and others is a serious problem because one in two people with diabetes remain undiagnosed, and it is the leading cause of heart diseases, stroke, blindness, kidney failure and lower limb amputation.

Explaining the symptom of diabetes, Dr. Isiavwe said: “Let me emphasize that about half of the people with diabetes do not have symptoms. Diabetes is usually picked up when we go to the eye clinic for surgery or have a stroke. But the lucky ones, the other 50 percent usually have frequent urination, they complain of thirst, lose weight and feeling tired. 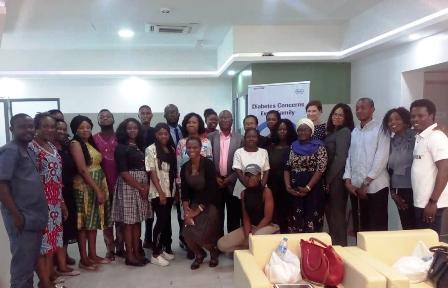 Participants at the Media Round Table

“Everybody is at risk of diabetes, children inclusive; children who have diabetes are those ones that are overweight. There is what we call the modifiable and non modifiable risk factors; the non modifiable risk factors are the things we really cannot do anything about, for instance ethnicity; the fact that we are Africans increases the risk. If you have a family history of diabetes it increases the risk, if you have been diagnosed with diabetes in pregnancy something called gestational diabetes you are also at risk.

Commenting on the 2018 World Diabetes Day, Dr. Isiavwe said: “ Everybody must get involved as diabetes affects all of us. You must know what it is, you must know what to do when you have it,” adding that people must discover, prevent and manage diabetes to avoid life threatening complications.

“When a family gets involved, life becomes a little easier for the patients because they will know why you have to do certain things like exercise. The media also owes the responsibility to let Nigerians know that diabetes is spreading, killing people and we need to fight it.

She added that the role of the family in the management, care, prevention and education of the condition cannot be overemphasized.

In her presentation, on the topic “Structured Testing of Blood Glucose in the Management of Diabetes,” the Head, Roche Diabetes Care Sub Sahara Africa, Mrs. Susie Snell, said Roche has been involved in diabetes patient care for 40 years by providing the Accu-check blood sugar measurement which they could use at home or anywhere they are. She highlighted the importance of structured testing of blood glucose as a necessary measure a patient must take to achieve control of the disease.’

Mrs Snell described the Accu-Chek device as a “tailor-made diabetes self management solutions” designed to help people with diabetes to manage their condition and also enhance their quality of life. She said the company constantly strives to improve on the device to ensure better accuracy in the measurement of blood sugar level.

Also, she said the company has taken measures to protect the device against fake and poor quality products brought into the country through parallel importation by introducing the authentication label to enable users confirm the authenticity of their strips through toll free SMS.

She announced that Roche will be introducing new devices in 2019 to further assist Nigerians living with diabetes and also help in early detection of new cases in the country, considering data showing that worldwide, one-third of people with diabetes don’t know they have it.

Earlier in her remarks, the President of the Nigerian Guild of Editors, NGE, Mrs. Funke Egbemode, who was the chairman of the forum, appreciated the recognition accorded NGE. She said the subject matter of the gathering is not only topical, but very important considering the fact that we are a few days away from the 2018 World Diabetes Day.

Egbemode who was represented by the General Secretary of NGE, Victoria Ibanga, said: “The topic is critical in the sense that it would afford Nigerian governments both at Federal and state levels to mount different stages or podiums to look us in the eyes and tell us how much has been achieved in the last one year or long years since the declaration of the day in 1991. We all know the reasons UN and other world bodies make declarations. It’s usually to look for all available ways to cut down incidents of diseases or bring an issue to the front burner,” said.

She charged the media to continue to create awareness about the disease and also shape public opinion.

‘No reason clinical trials cannot be done in Nigeria’