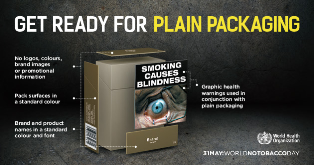 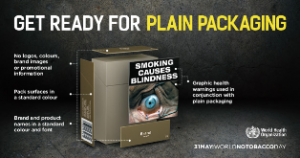 GENEVA  – The world marks the World No tobacco Day today with a call by the World Health Organisation (WHO) on all countries to introduce plain (standardized) packaging of tobacco products.

In a press statement, WHO says recent moves to introduce plain (standardized) packaging of tobacco products can save lives by reducing demand for tobacco products, according to WHO and the WHO Framework Convention on Tobacco Control Secretariat (WHO FCTC).

Plain packaging of tobacco products restricts or prohibits the use of logos, colours, brand images and promotional information on packaging other than brand and product names displayed in a standard colour and font style.

“In December 2012, Australia became the first country to fully implement plain packaging. On 20 May 2016, France and the United Kingdom of Great Britain and Northern Ireland each began implementation of plain packaging. Ireland is also preparing to introduce the measure, while other countries are exploring the option,” the statement reads.

“Plain packaging reduces the attractiveness of tobacco products. It kills the glamour, which is appropriate for a product that kills people,” says WHO Director-General Dr Margaret Chan. “It restricts tobacco advertising and promotion. It limits misleading packaging and labelling. And it increases the effectiveness of health warnings.”

Plain packaging is recommended in WHO FCTC guidelines as part of a comprehensive approach to tobacco control that includes large graphic health warnings and comprehensive bans on tobacco advertising, promotion and sponsorship.

Smoking in Australia has been steadily declining for years. Australia introduced plain packaging, in conjunction with new and enlarged health warnings, in 2012. Between December 2012 and September 2015, there was an additional 0.55 percentage point fall in smoking prevalence among those aged 14 and above attributable to the packaging changes, according Australia’s post-implementation review. This equates to more than 108,000 people quitting, not relapsing or not starting to smoke during that period.

Dr Oleg Chestnov, WHO’s Assistant Director-General for Noncommunicable Diseases (NCDs) and Mental Health, says Australia’s plain packaging results demonstrate the great potential of the measure. “Plain packaging can reduce consumption of tobacco products, as clearly seen in Australia. It offers a powerful tool to countries as part of a comprehensive approach to tackle the scourge of tobacco use,” says Dr Chestnov.

The theme of this year’s World No Tobacco Day – Get ready for plain packaging – highlights this new trend in global efforts to control tobacco products, which kill almost 6 million people annually, notes Dr Douglas Bettcher, WHO’s Director for the Prevention of NCDs.

“Plain packaging is going global as more and more countries seek the important health gains it can bring to communities,” says Dr Bettcher. “The tobacco industry has been getting ready for plain packaging for some time, conducting massive misinformation campaigns to block the measure.”

“So it is encouraging to see more and more countries defy the industry’s tactics and implement plain packaging to reduce demand for tobacco products and put the health of their populations first.”

To mark World No Tobacco Day, WHO is launching a new guide to plain packaging of tobacco products, which gives governments the latest evidence and guidance on implementing the measure.

“Most governments are committed to curbing the tobacco epidemic and reducing tobacco-related harm, such as deaths from cancers, heart and lung diseases,” says Dr Vera da Costa e Silva, Head of the WHO FCTC Secretariat. “It is vital they have access to evidence-based, effective guidance that can support their efforts to protect the health of their populations.”

Tobacco-related illness is one of the biggest public health threats the world has ever faced. Approximately 1 person dies from a tobacco-caused disease every 6 seconds, equivalent to almost 6 million people a year. This is forecast to rise to more than 8 million people a year by 2030, with more than 80% of these preventable deaths occurring among people living in low-and middle-income countries.

Tobacco use is one of the largest preventable causes of noncommunicable diseases (NCDs). Tobacco control represents a powerful tool in improving health in communities and in achieving the Sustainable Development Goals (SDGs). SDG target 3.4 is to reduce premature deaths from NCDs by one-third by 2030, including cardiovascular and chronic respiratory diseases, cancers and diabetes. NCDs accounted for the deaths of 16 million people under the age of 70 years in 2012 – 82% of which occurred in developing countries.

The WHO Framework Convention for Tobacco Control (WHO FCTC) entered into force in 2005. Parties are obliged to take a number of steps to reduce demand and supply for tobacco products. Actions addressed in the Convention include protecting people from exposure to tobacco smoke, banning tobacco advertising, promotion and sponsorship, banning sales to minors, requiring health warnings on tobacco packaging, promoting tobacco cessation, increasing tobacco taxes and creating a national coordinating mechanism for tobacco control. There are 180 Parties to the Convention.