The world’s first malaria vaccine is promising but should be used on a pilot basis before any wide-scale use, given its limited efficacy, World Health Organization (WHO) experts said on Friday. 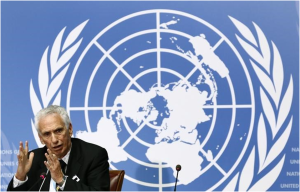 ons of cases of malaria in young children in Africa at risk of the deadly mosquito-borne disease.
However, it is less effective than vaccines against many other diseases and there is uncertainty as to whether countries can effectively administer the four doses needed.
Jon Abramson, chairman of the WHO Strategic Advisory Group of Experts, or SAGE, said experts recommended there should be three to five demonstration projects in children aged five to 17 months before considering wider use.
These projects could involve up to 1 million children and would likely take three to five years to run, he added. SAGE did not recommend the use of Mosquirix, also known as RTS,S, in young babies.
Committee experts said it was vital to give all four doses of the vaccine to ensure optimal efficacy, even though getting children back for multiple repeat shots could be challenging.
“If we can’t get four doses of this vaccine into the children, we’re not going to be using it,” Abramson told reporters.
“What we are recommending is that before we have widespread use of this vaccine – and we wouldn’t necessarily use it in a very low incidence area, but in all medium and high areas – that we know that we can get that fourth dose in.”
Hopes that GSK’s vaccine could wipe out malaria were dampened when trial data in 2011 and 2012 showed it reduced malaria episodes in babies aged six to 12 weeks by only 27 percent, and by about 46 percent in children aged five to 17 months. Part of that could be down to genetics.
‘A TON OF MONEY’
GSK said it was ready to work with the WHO to support the pilot implementation of the vaccine. “We hope this will provide the additional information needed about how to best deliver the vaccine in a real-world setting,” a spokeswoman said.
Abramson said the vaccine was likely to cost around $5 a dose, or $20 for a four-dose course, which is four times the cost of an insecticide-treated bed net. It could be funded by the GAVI international vaccine alliance, though no decision on this has yet been made.
“If this vaccine is not effective and we use it widely we will have spent a ton of money which could have been better placed,” Abramson said.
Medical charity Medecins Sans Frontieres said SAGE was right to be wary about using a costly intervention with a patchy record.
Adrian Hill, a vaccine expert at Oxford University’s Jenner Institute, told Reuters: “This really underscores the need for work on developing other promising malaria vaccine candidates to be accelerated.”
Alternative malaria vaccines are still at least five to 10 years away from being licensed.
This year alone, there have been an estimated 214 million new cases of malaria, with around 438,000 deaths.
GSK has said it will not make any profit on Mosquirix, since a planned mark-up of just 5 percent on the cost of production will be reinvested in research on tropical diseases.